Located at Longquanguan Town, Fuping County, Hebei, Luotuowan Village borders Shanxi Province, at the foot of the north side of Taihang Mountains. Surrounding mountains resulted in transportation to the village, which held back the village’s economic development and caused an increasing number of dilapidated houses. In recent years, however, the local government has allocated plenty of financial and material resources to renovate and construct houses in the village and help it shake off poverty. After unremitting efforts, quality of villagers’ life has been gradually improved. Before the renovation, villagers were allowed to choose a traditional wooden roof or roof made of cast-in-situ concrete for the house. The latter solution was more preferred because it was easier to implement and most of residents here were middle-aged and elderly people. During the village revamping process, a large number of wooden beams and rafters were dismantled and left over. Previously, the wood waste had been used to make a fire for heating and cooking. But in these days, due to the call for ecological environment protection and forest fire prevention as well as the fact that air source heat pumps and gas equipment for cooking were introduced into the village, the dismantled woods of various sizes were left unused. 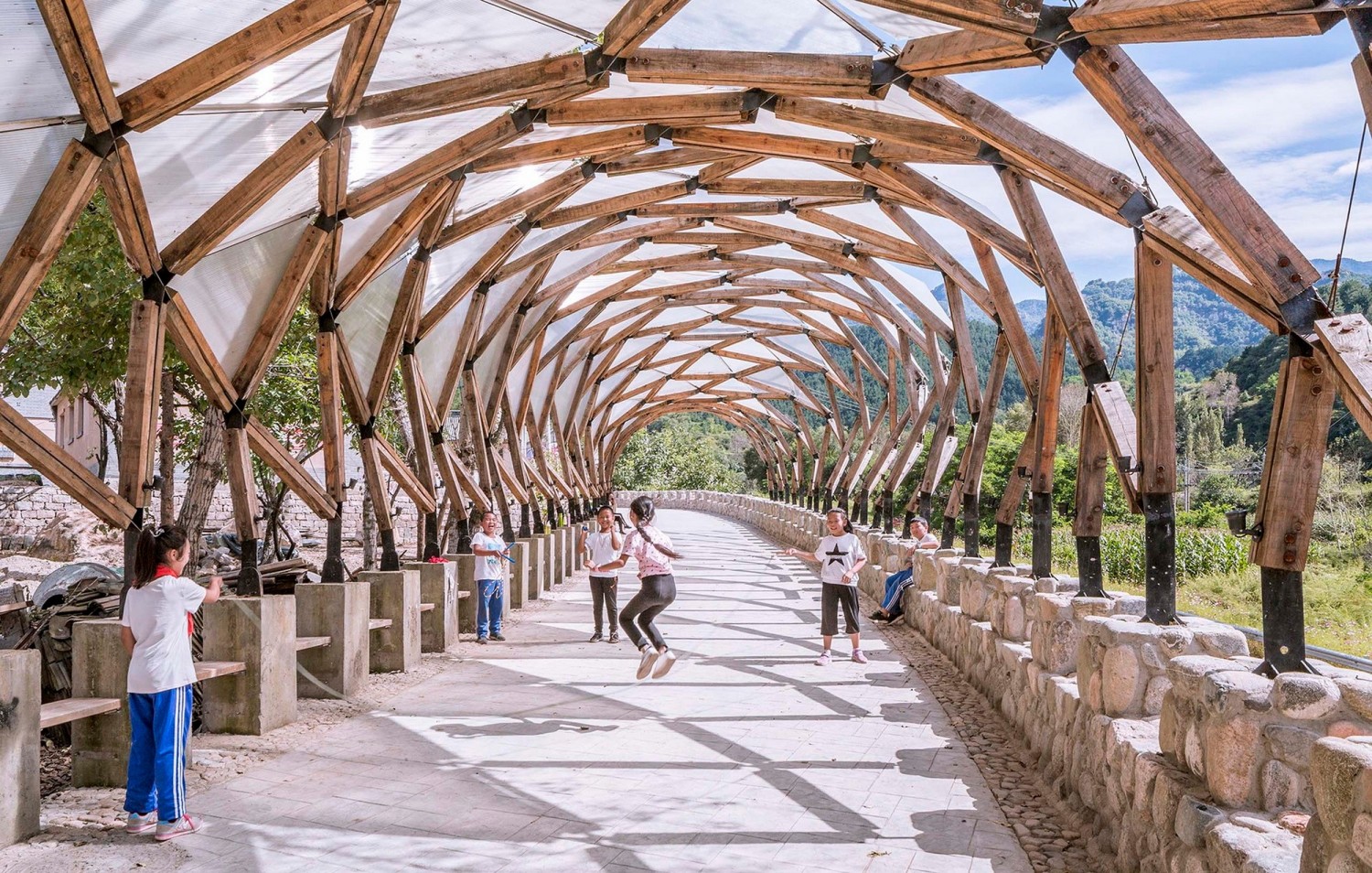 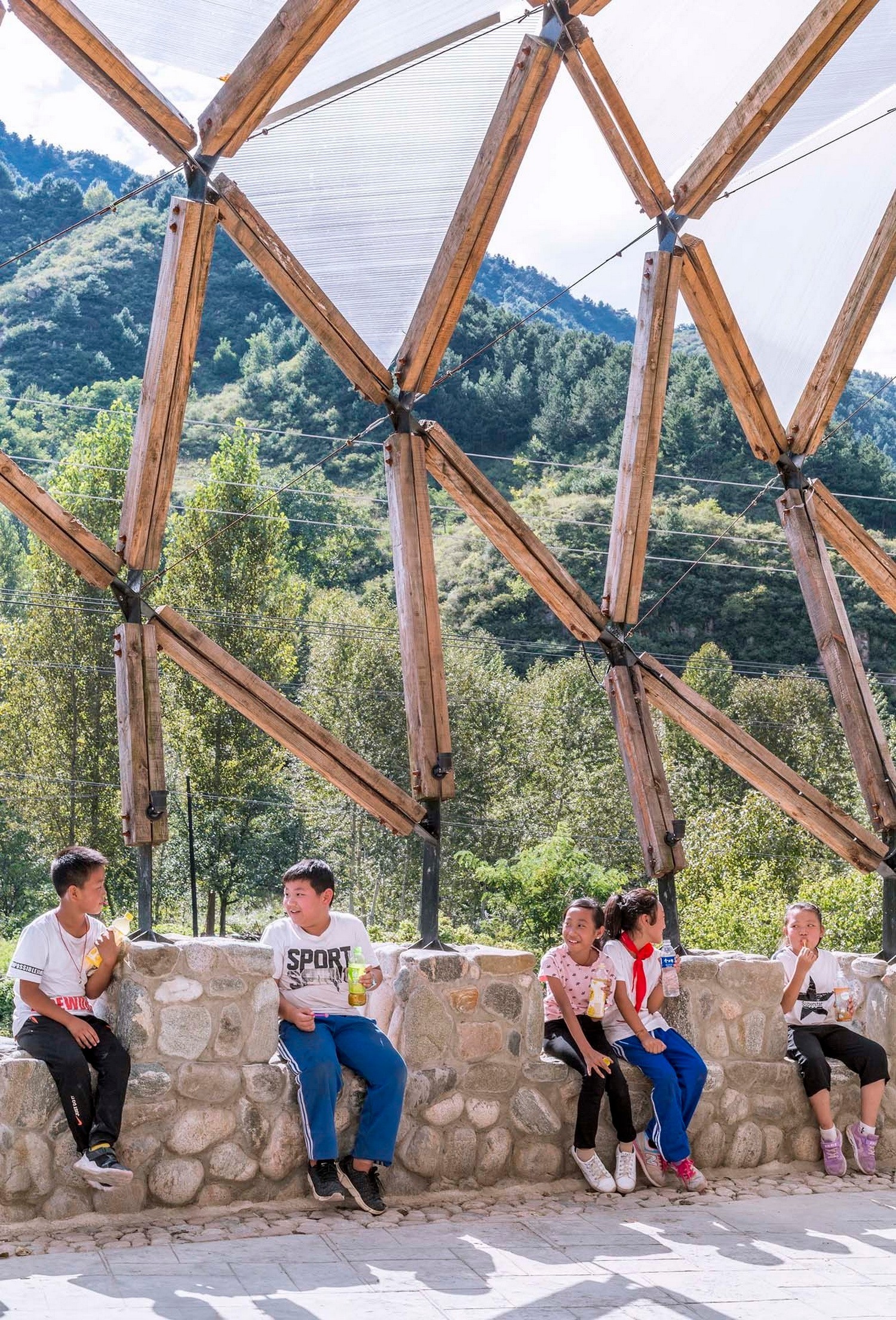 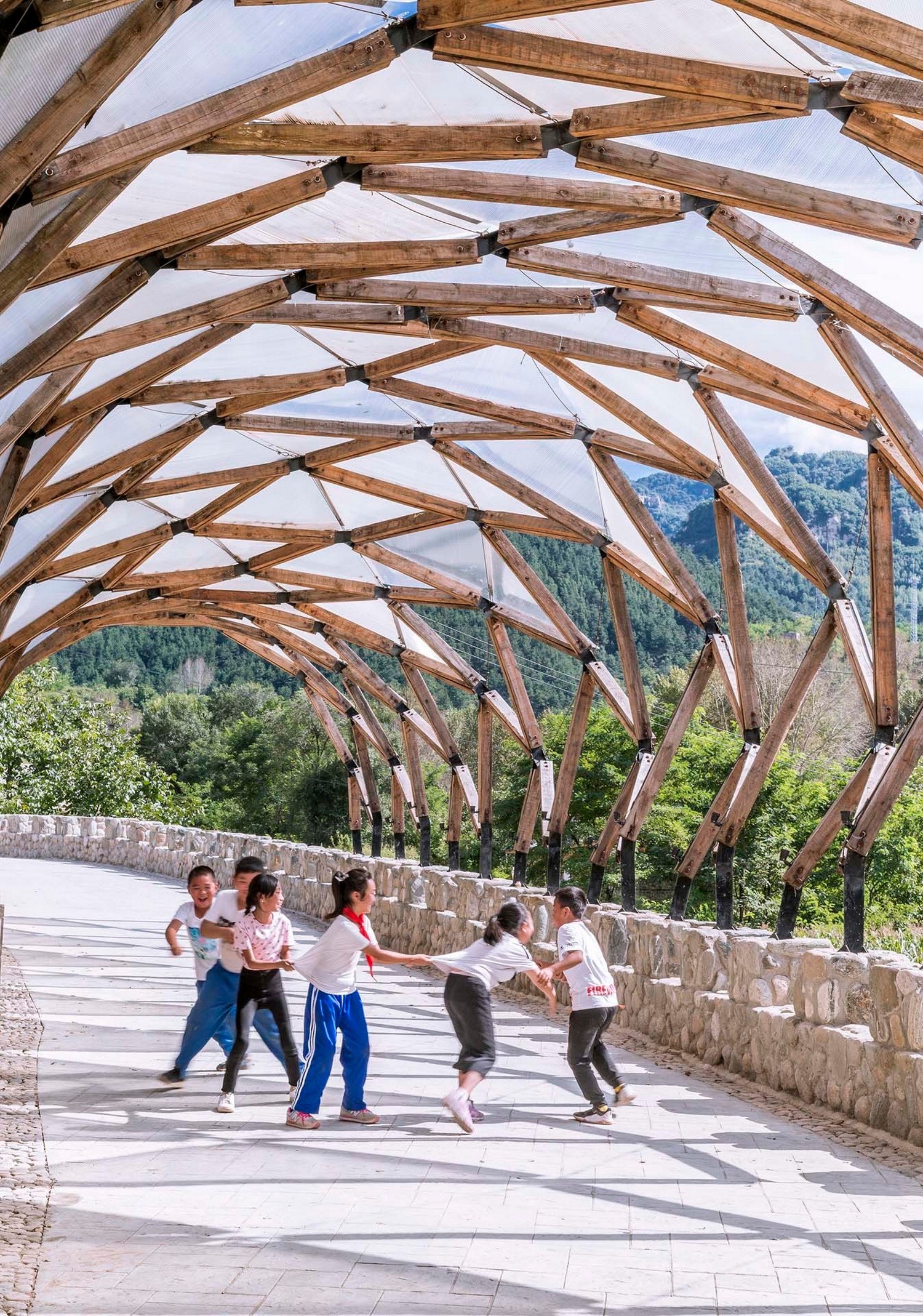 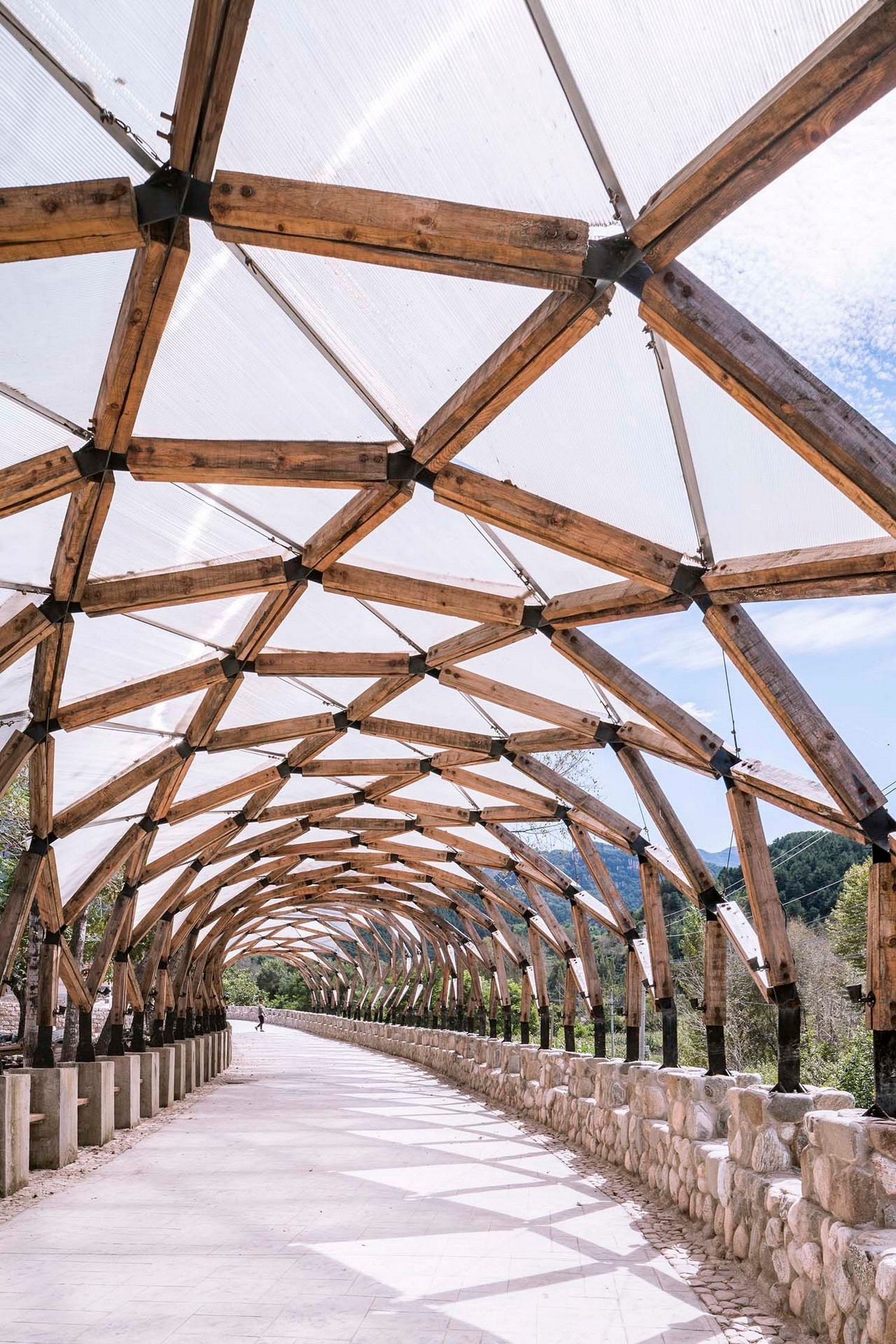 Shade pergola over the scarp

The village was built through reclamation of mountain and wasteland, so there were many slope protection structures and scarps. Villagers intended to have a shade pergola over a long scarp with cement column piers along both sides, for them to have a rest in the shade. According to the original plan, heavy square steel bars and large timbers were identified as main construction materials, which needed to be purchased and transported from the faraway county or city markets and required a professional construction team and utilization of crane. And flat area at the site was too narrow to operate heavy machinery, which meant it was dangerous for people and livestock once accidents occurred. When we happened to see design drawings of this project, we suggested to work out a simpler and more convenient solution for construction. 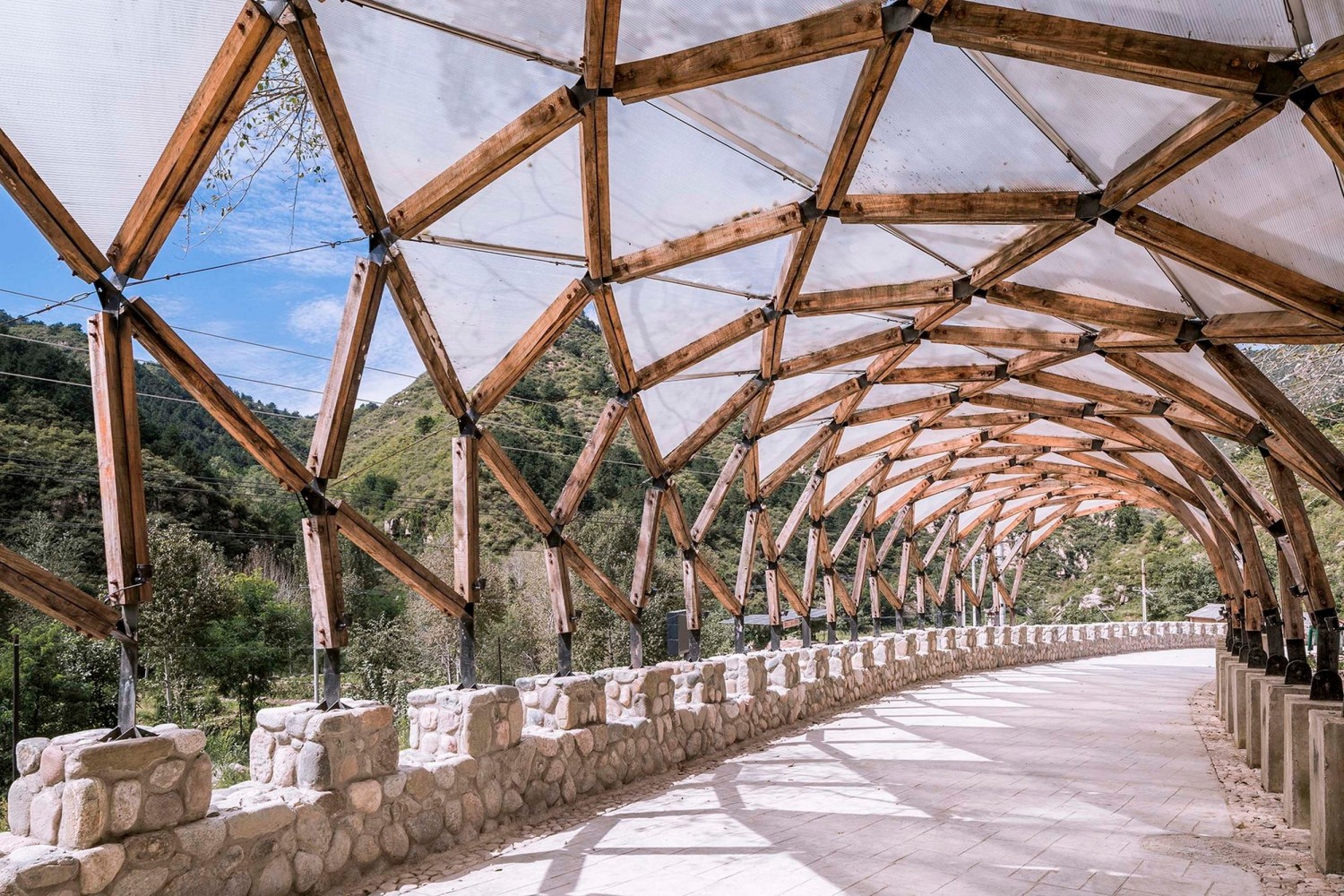 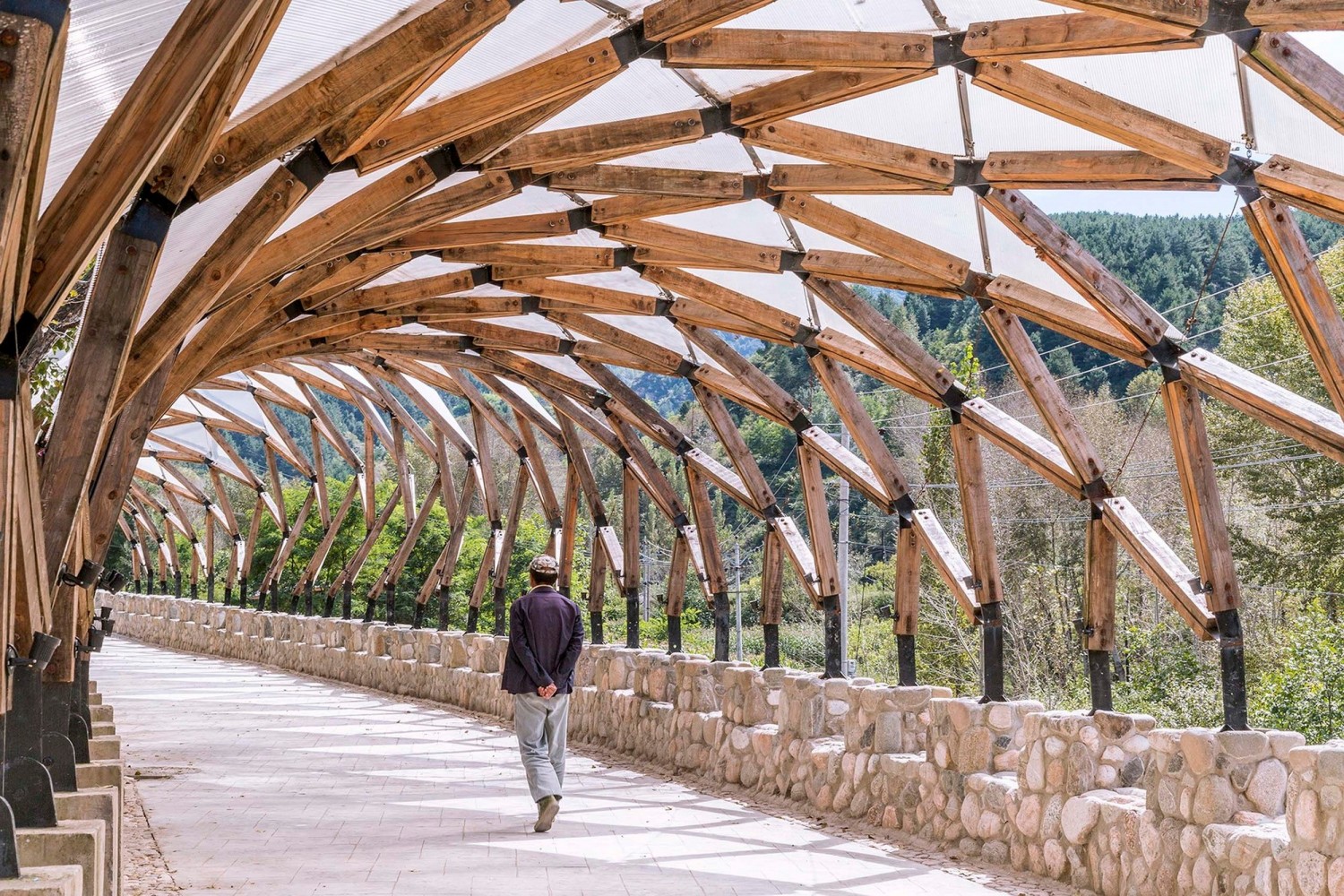 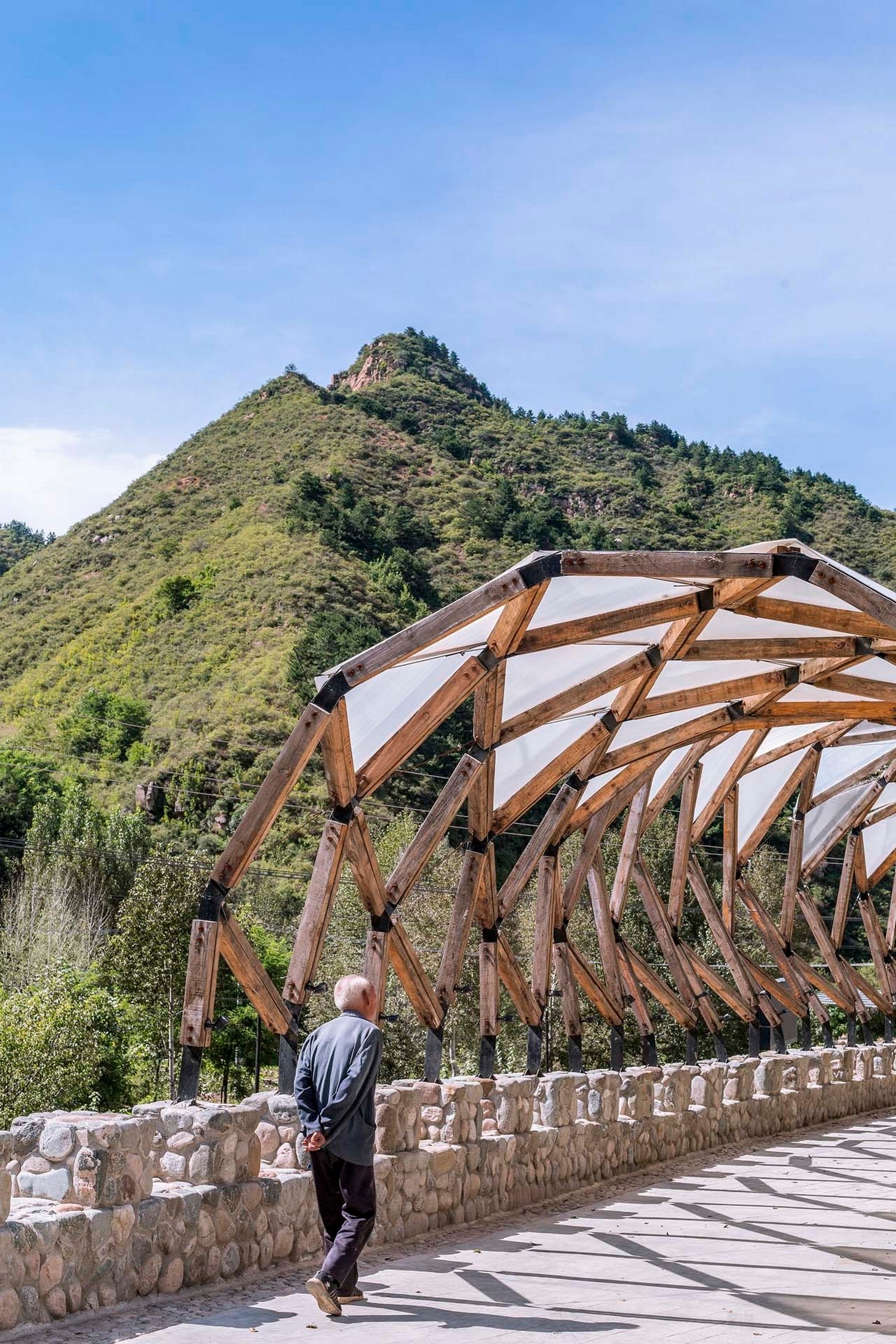 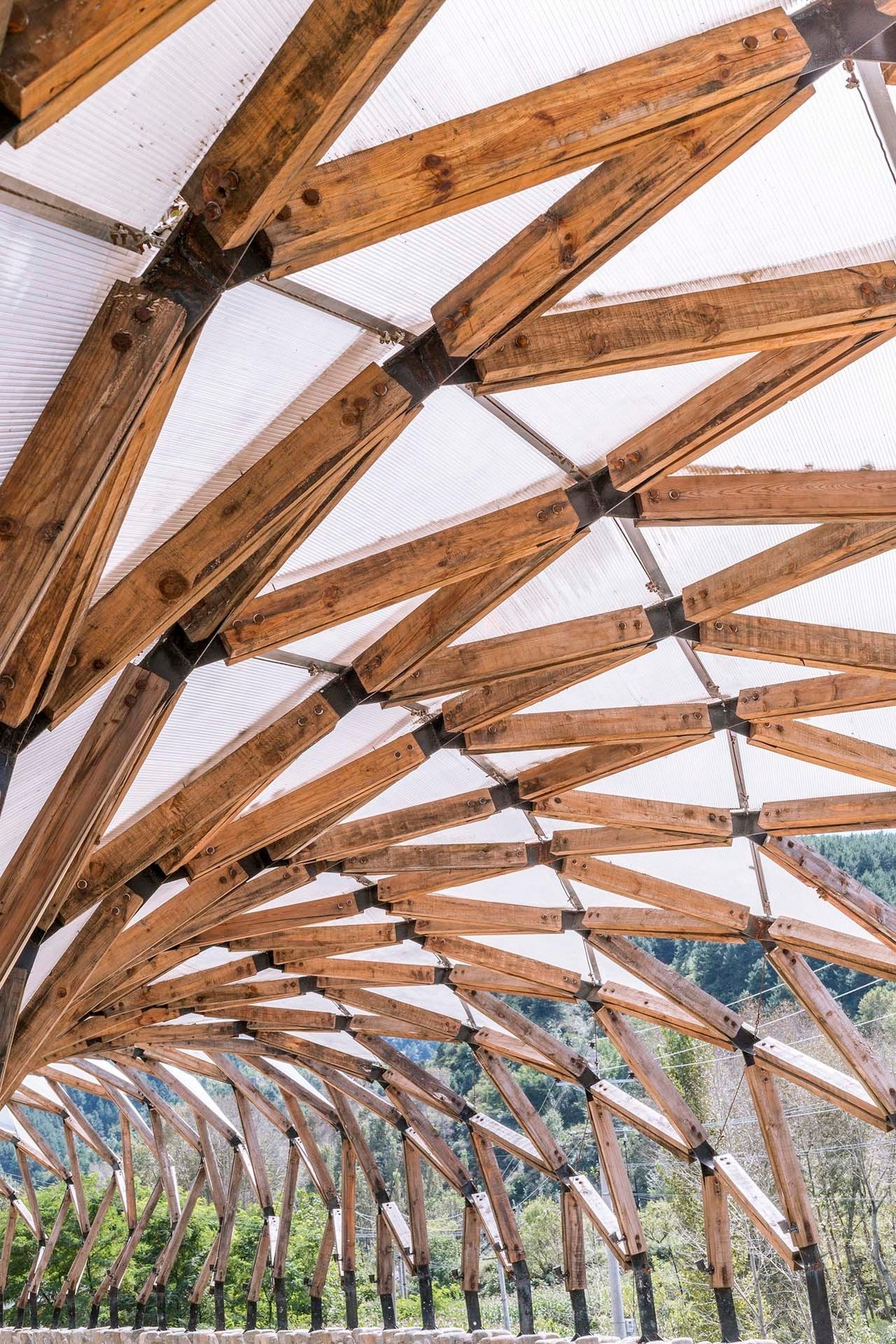 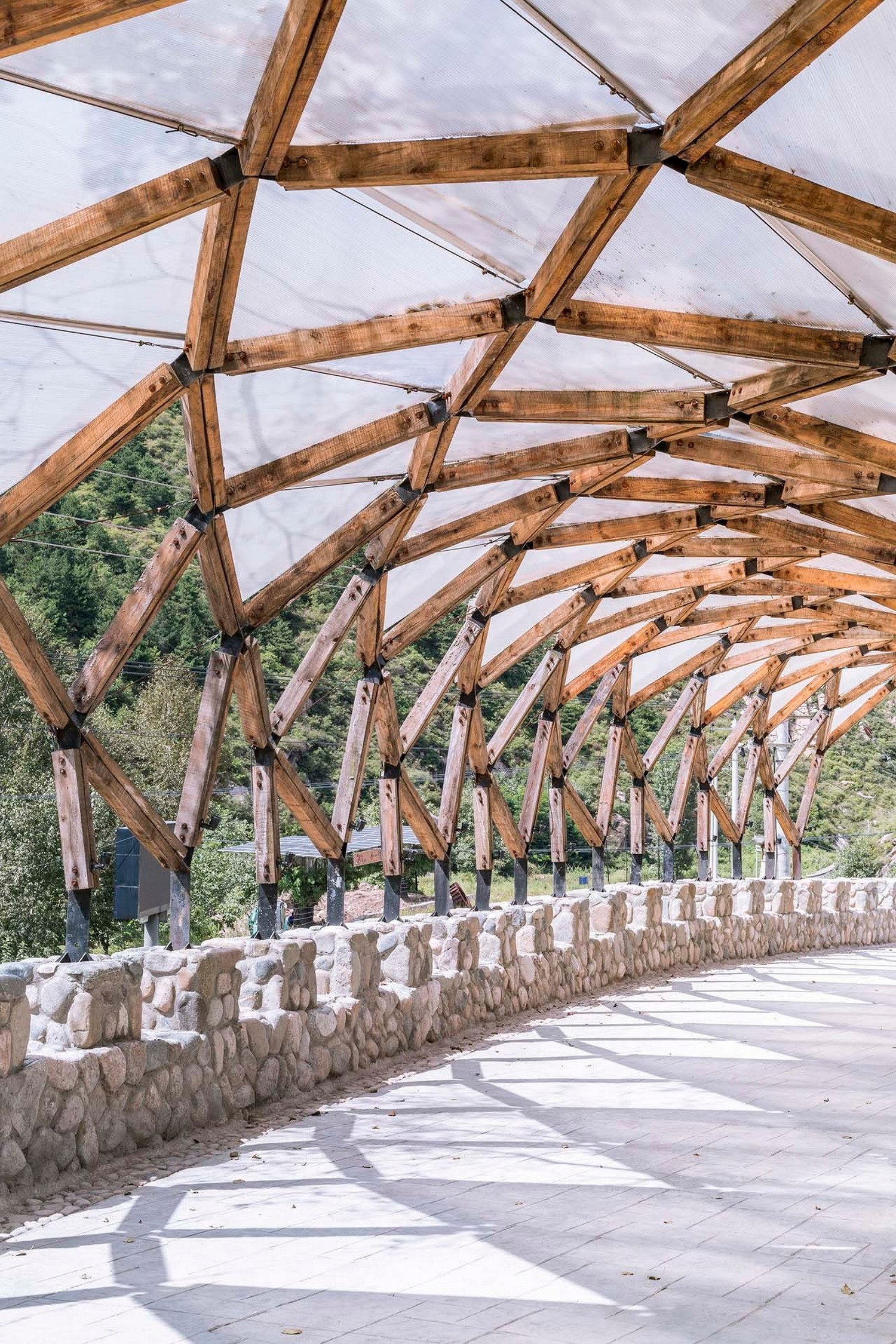 Dymaxion & best use of materials

Richard Buckminster Fuller summed up his concept on technology and human development: “dymaxion”, which means maximum gain of advantage from minimal energy input. As for construction activities, “dymaxion” can be interpreted as “building the largest space and the most solid structure with minimal material use”. 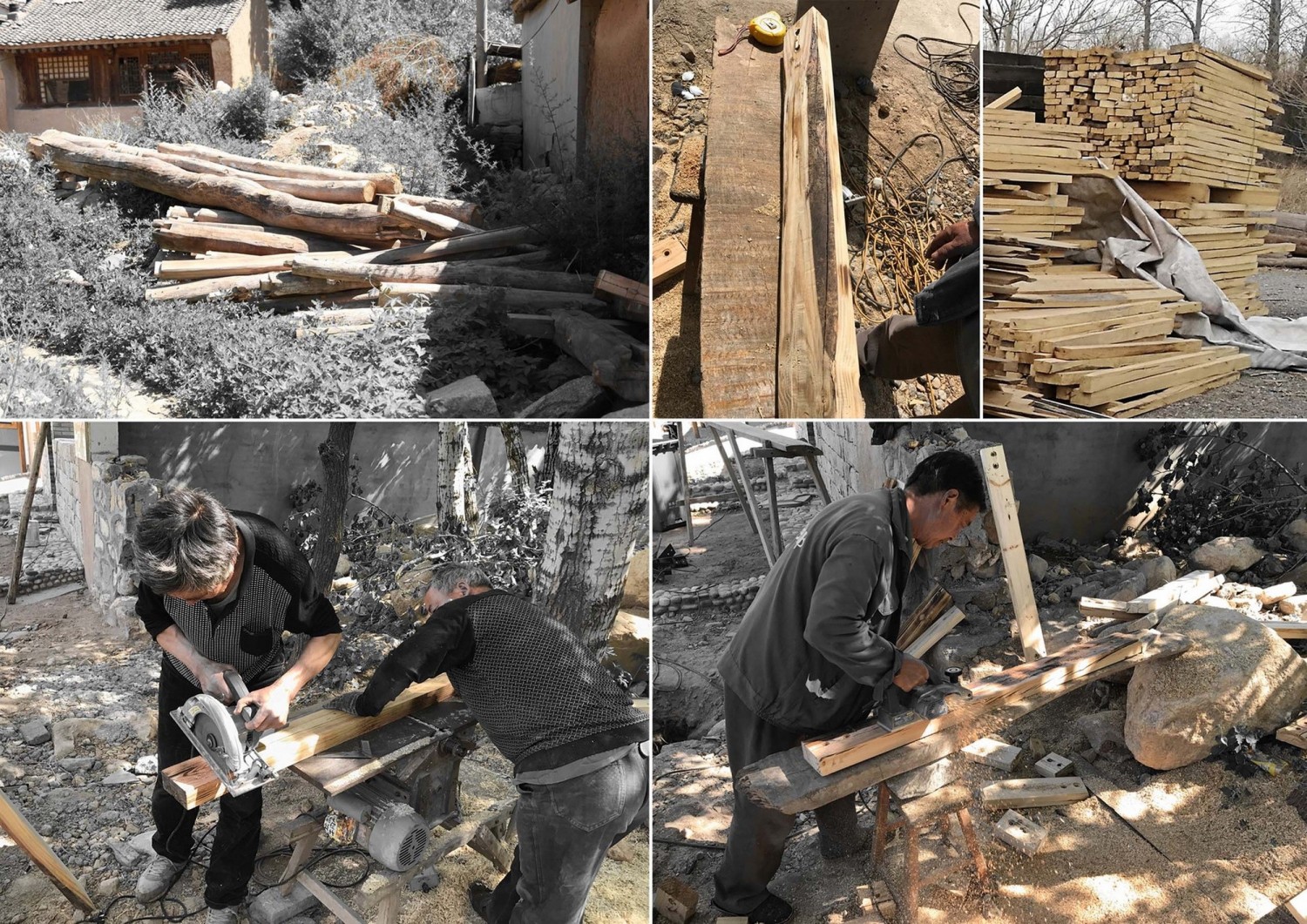 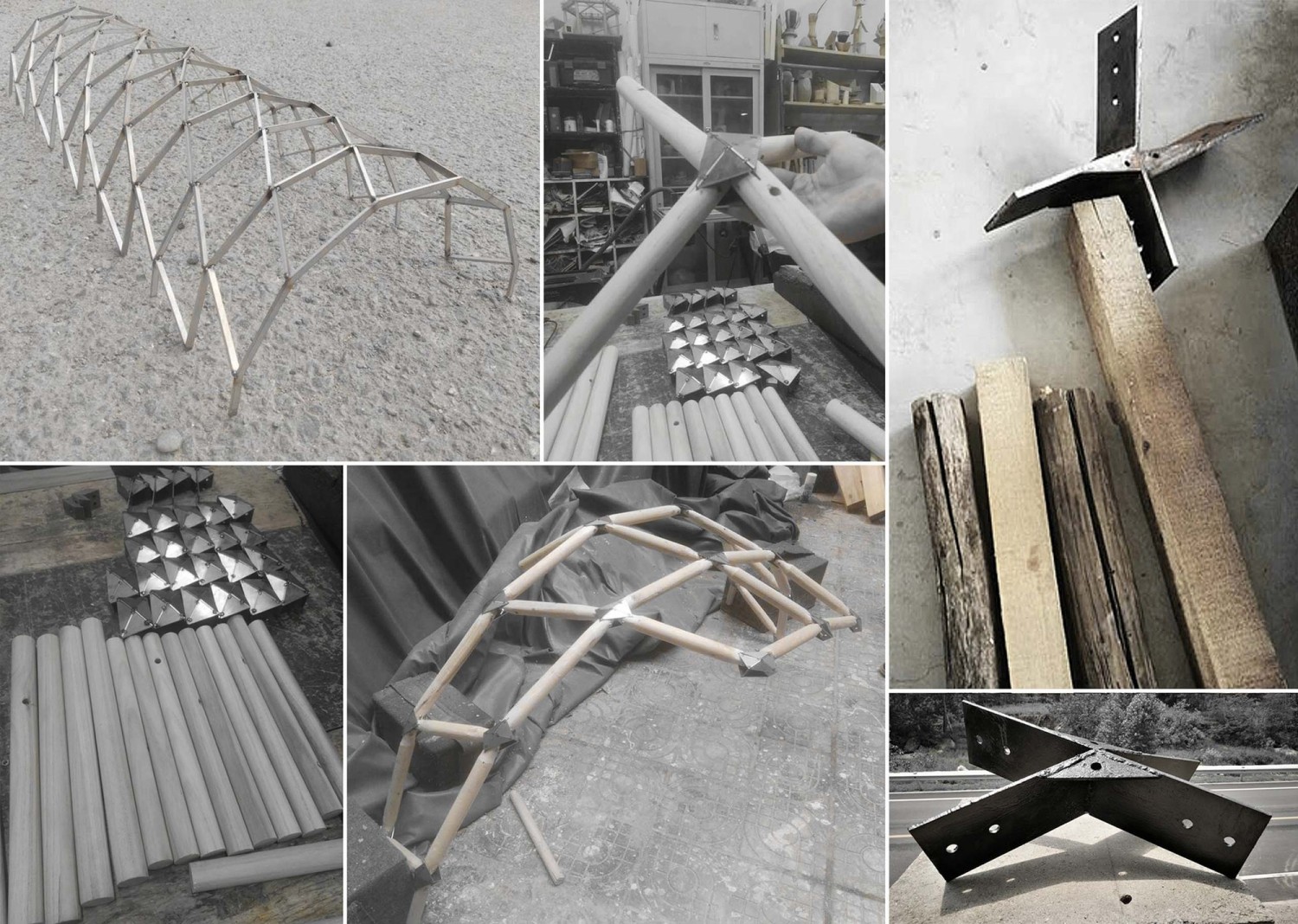 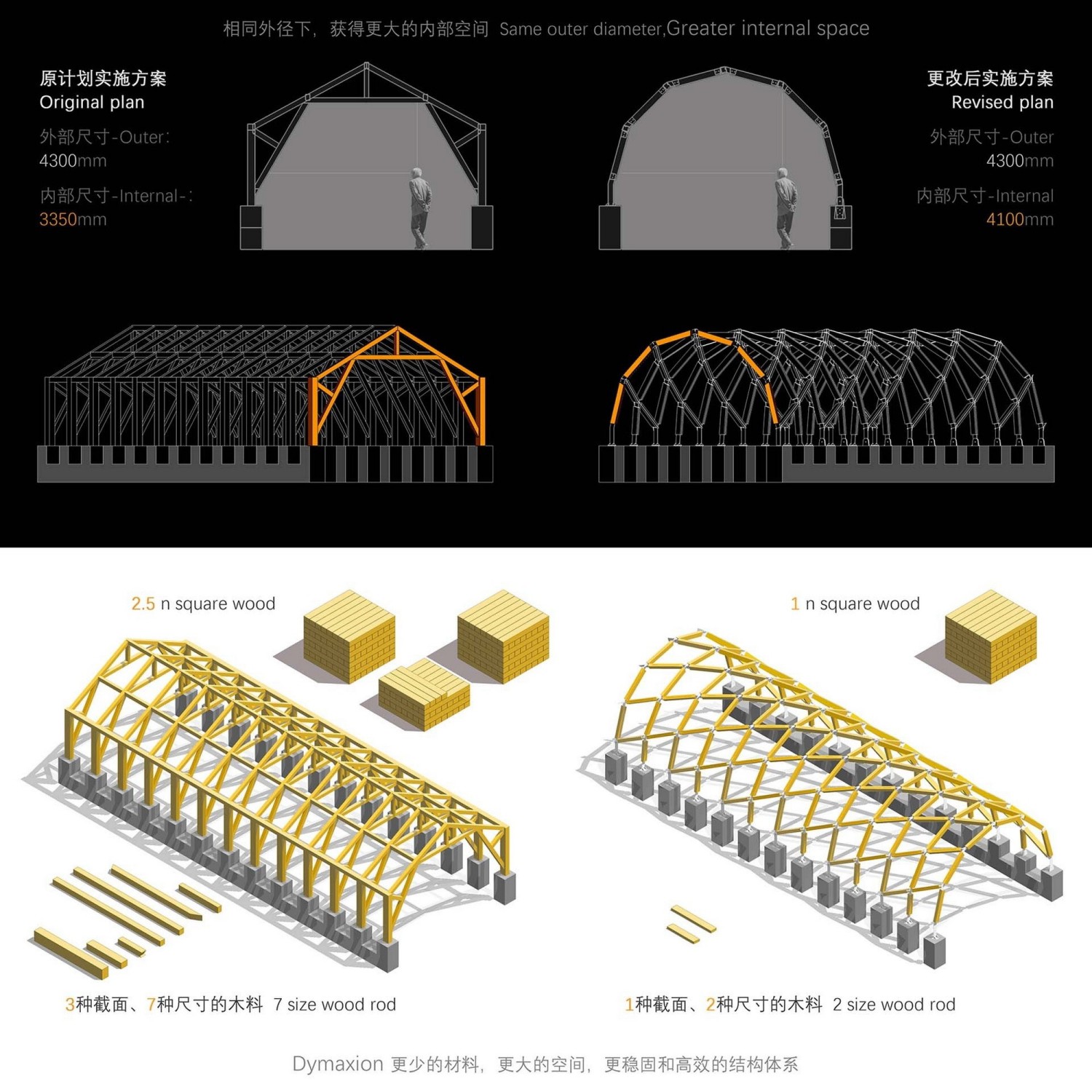 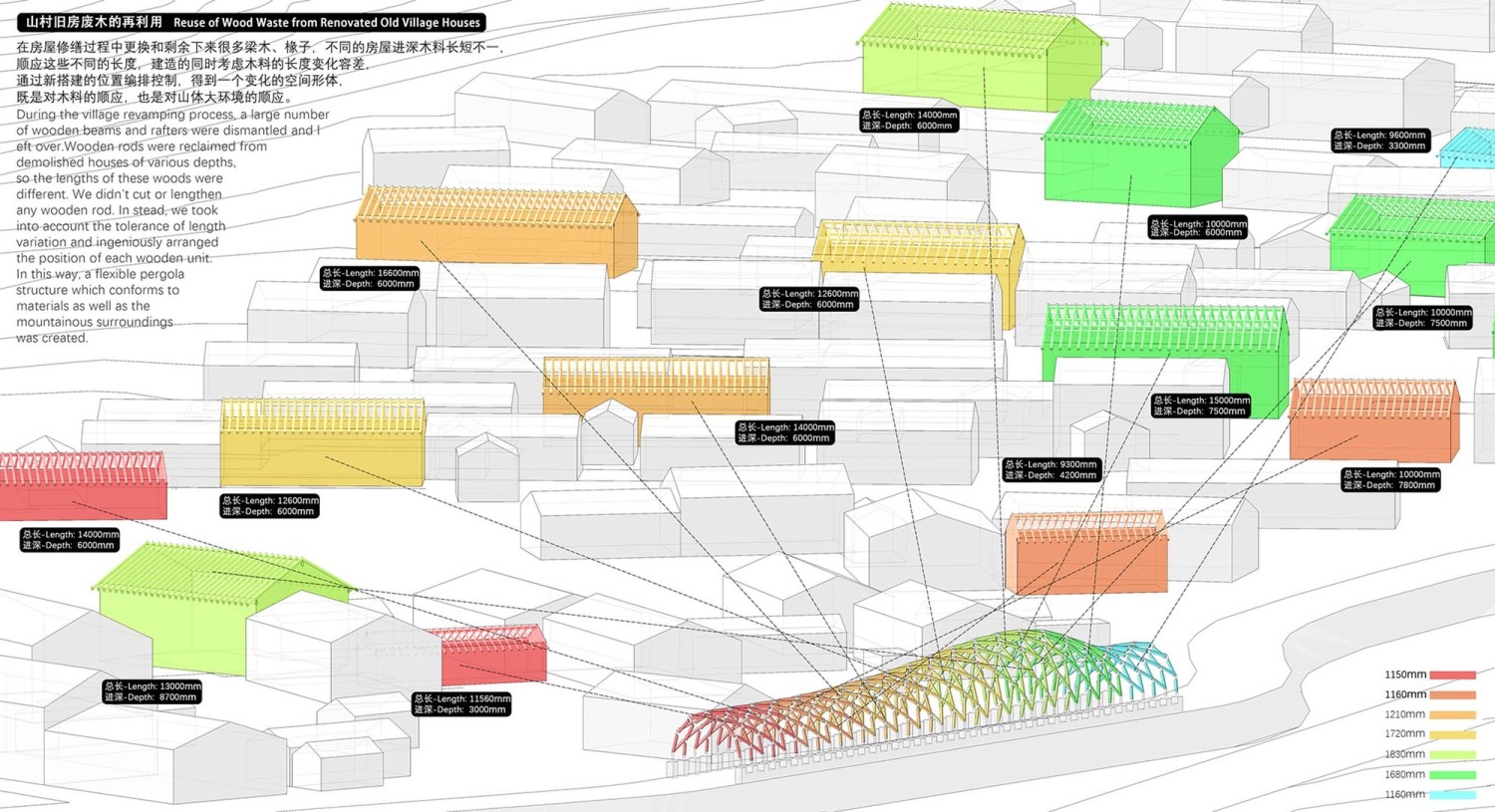 The design philosophy of “dymaxion” actually resonates with the concept of rural construction. Nowadays, many Chinese villages present a unique built landscape, which was created by  generations of villagers who had the wisdom to make use of local materials and maximize functions with minimal input. 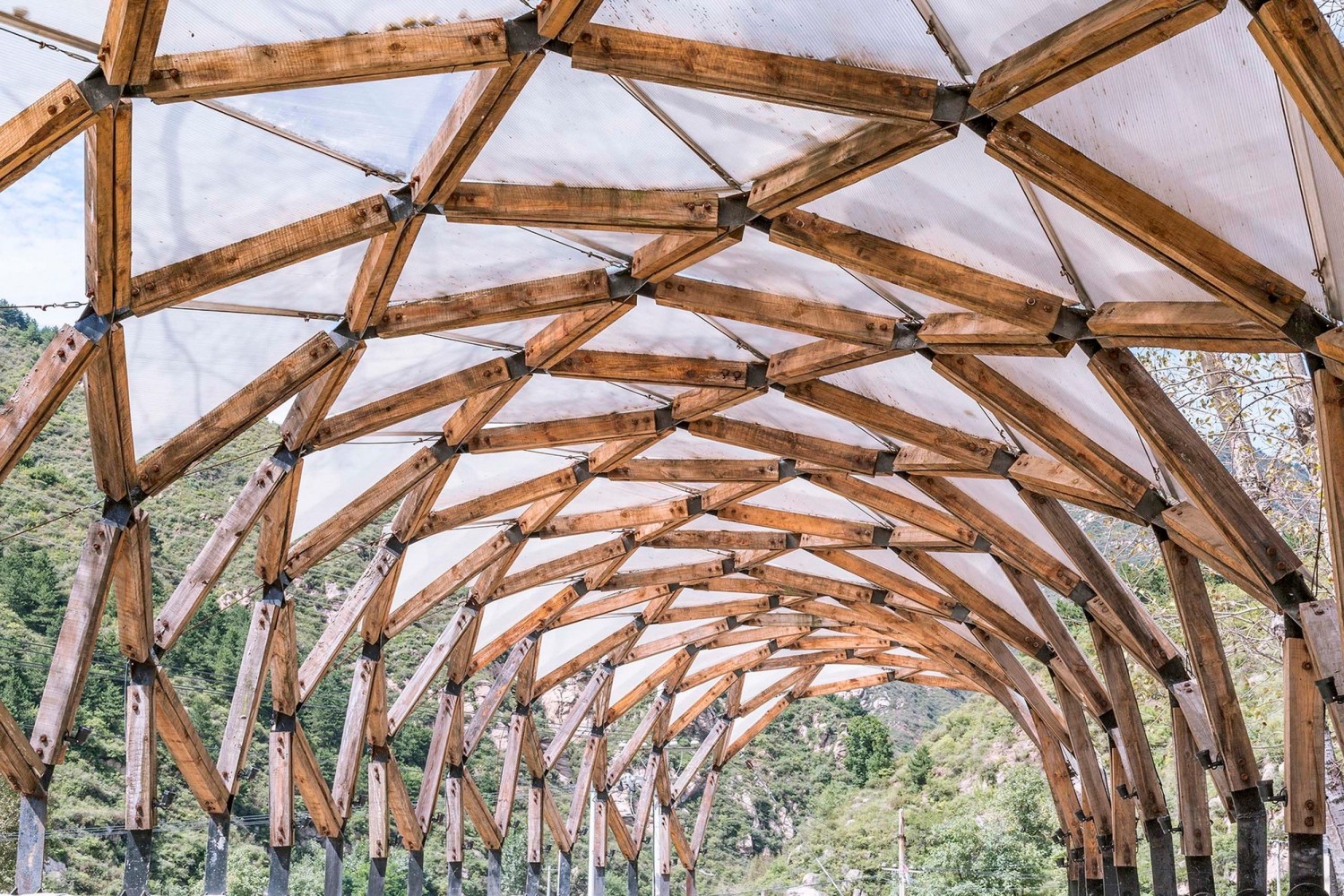 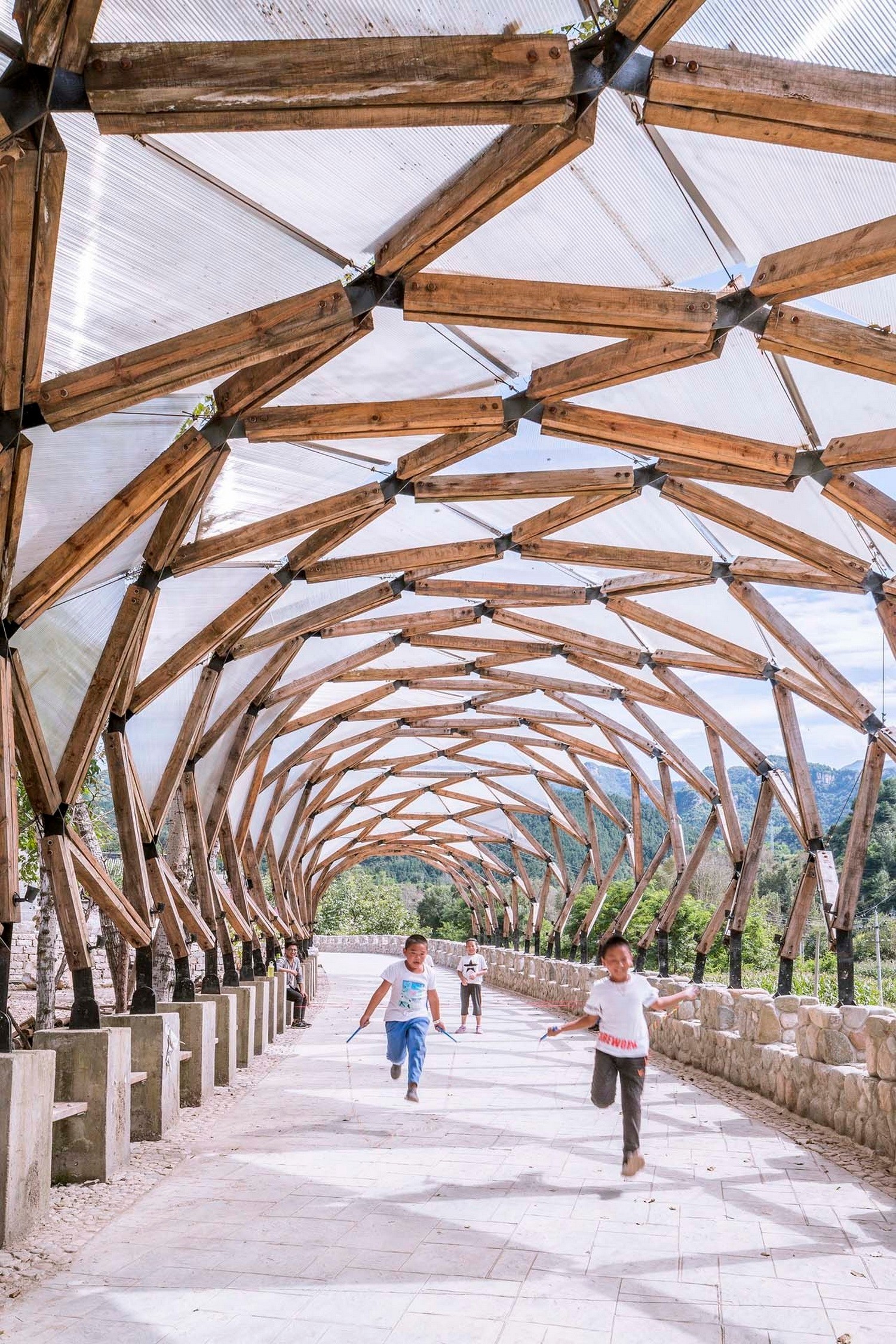 Materials for construction units were designed as small as possible, so that more wood waste could be reused and the construction work could be carried out by villagers themselves. Wooden rod units constitute the structural system, which enhances stability and obtains a larger space. The structure features grids that improve its performance in withstanding forces of nature, hence ensuring greater safety for a long period of use. With such construction scheme, we saved costs and improved efficiency. 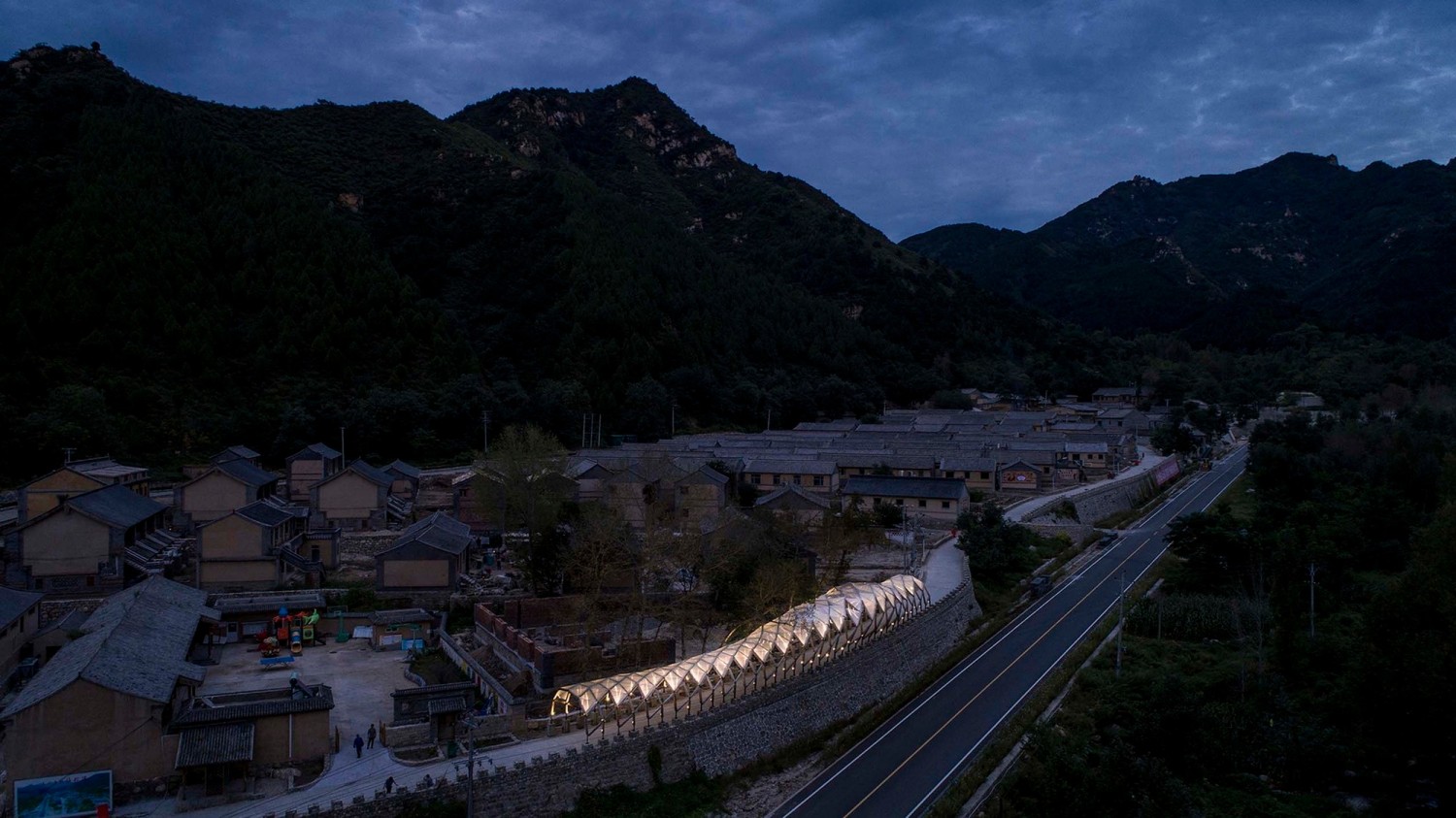 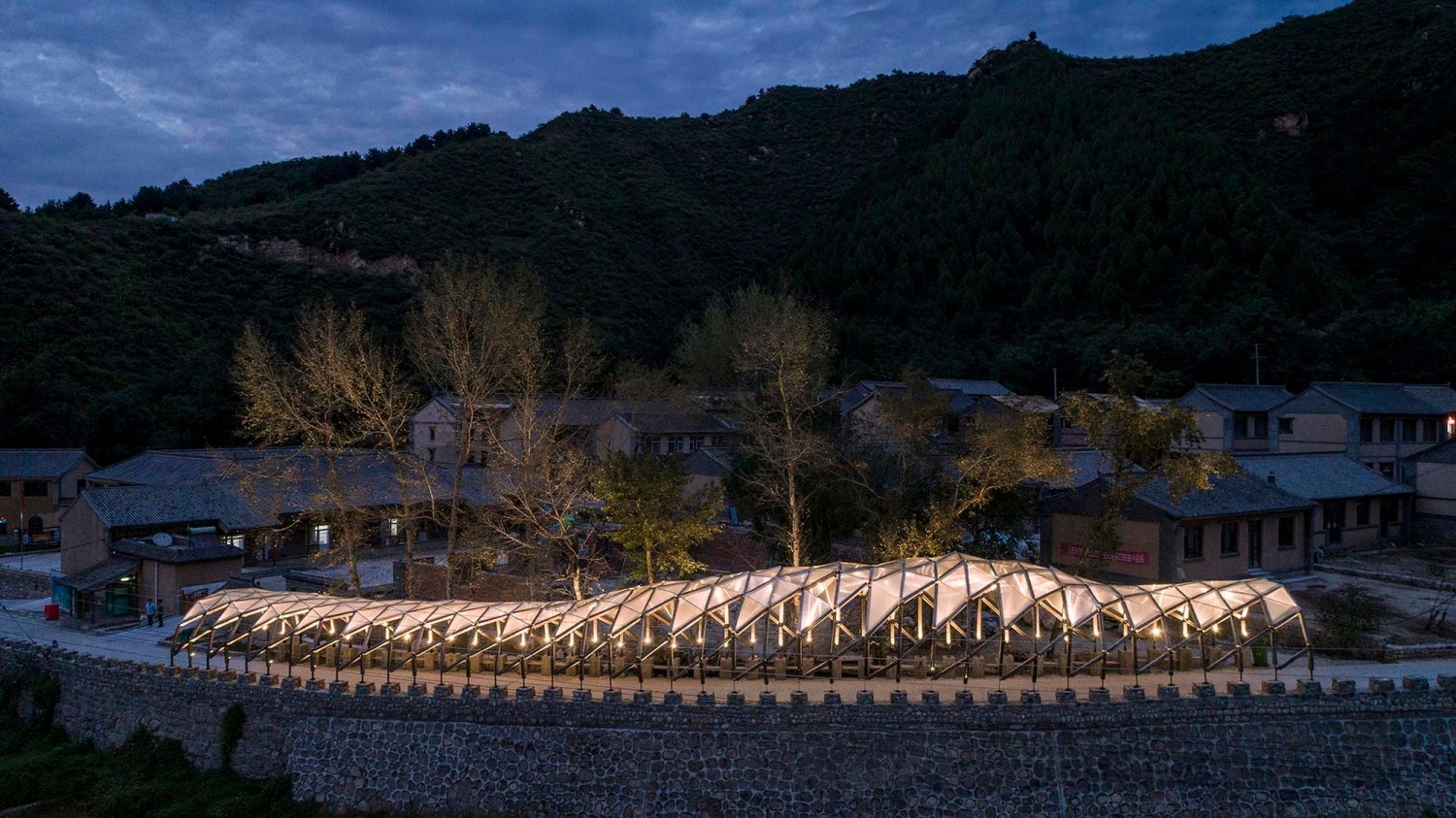 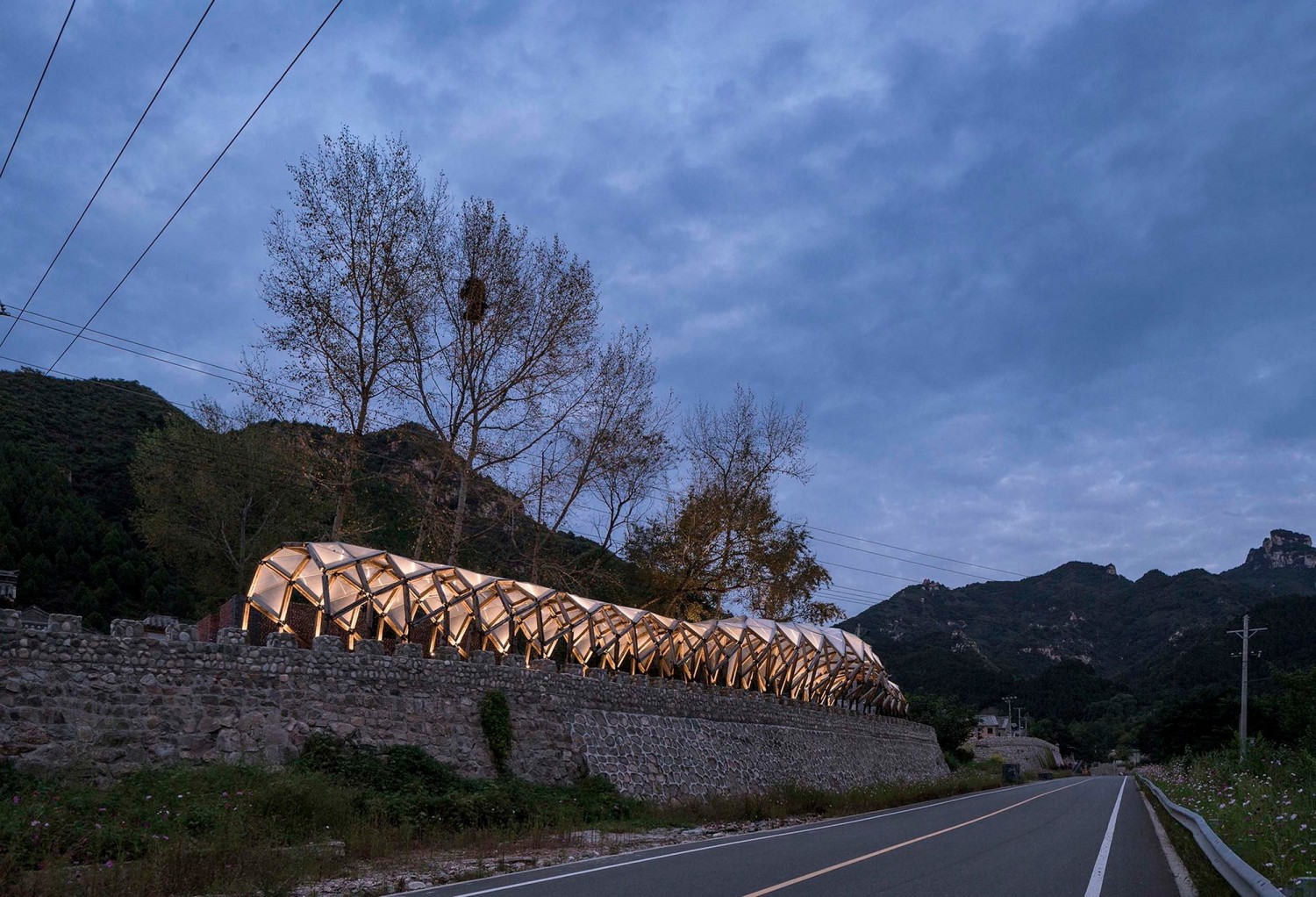 We kept varying lengths of wood materials, and worked to create a structure that is well integrated with the surrounding mountains. Wooden rods were reclaimed from demolished houses of various depths, so the lengths of these woods were different. We didn’t cut or lengthen any wooden rod. In stead, we took into account the tolerance of length variation and ingeniously arranged the position of each wooden unit. In this way, a flexible pergola structure which conforms to materials as well as the mountainous surroundings was created. 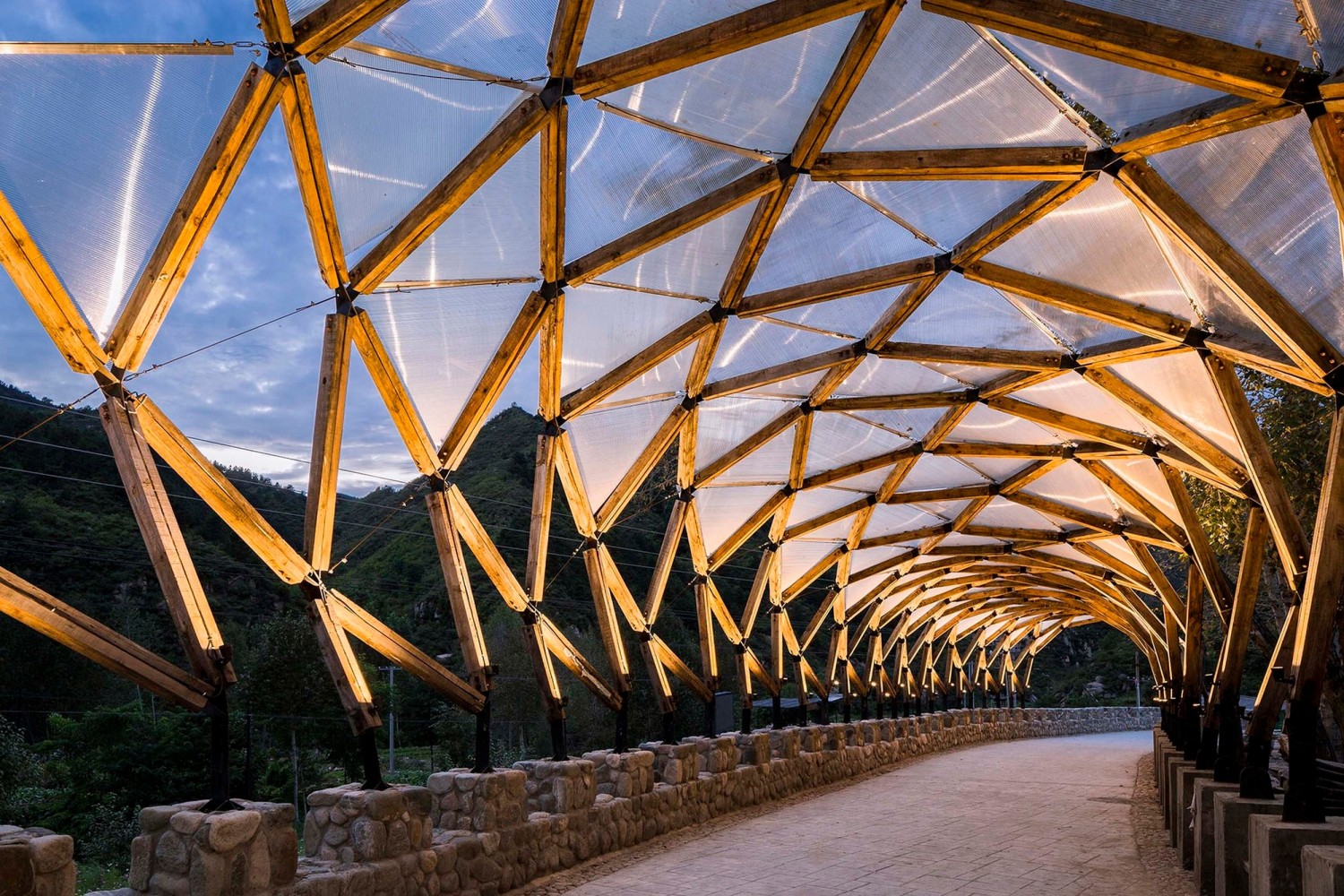 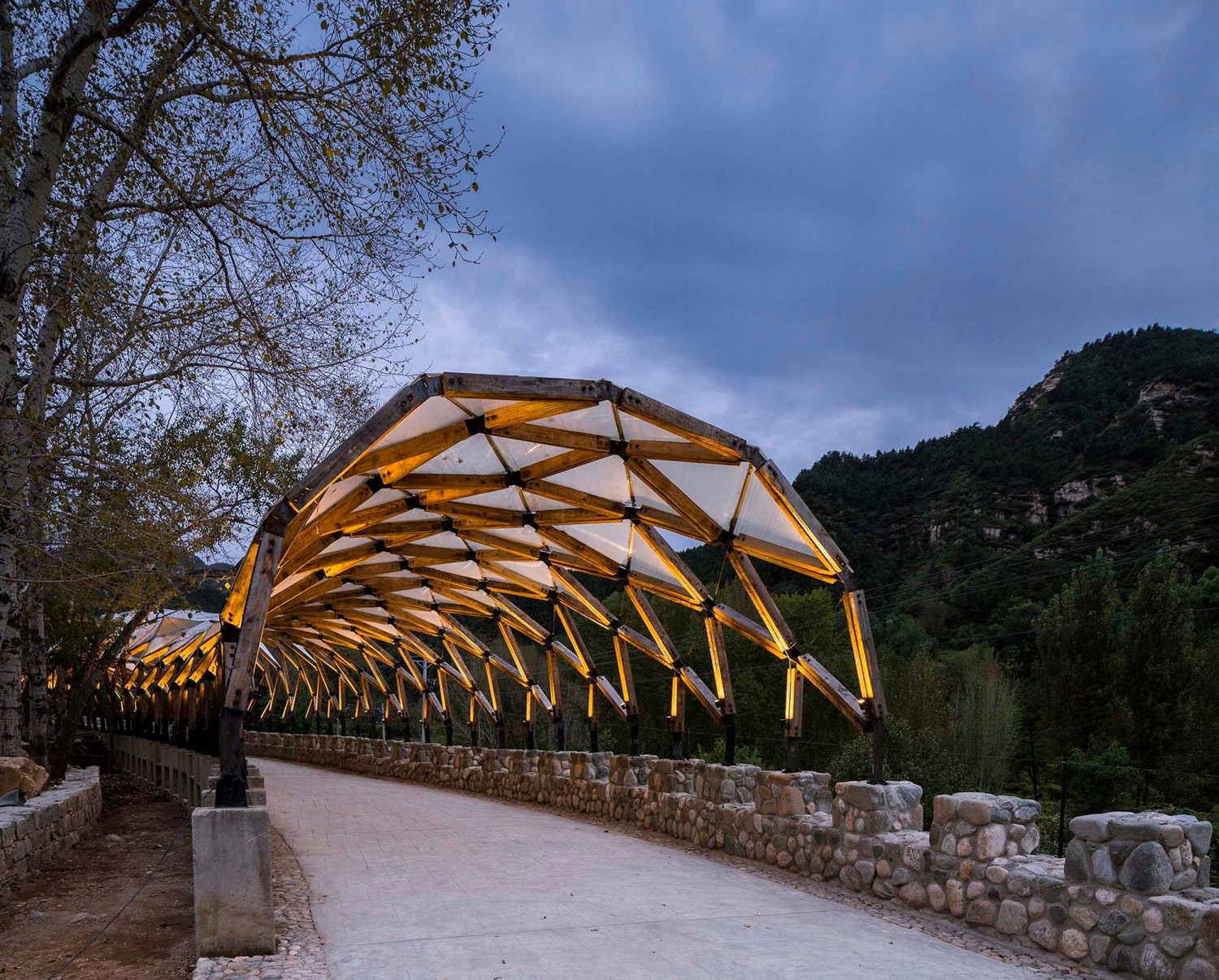 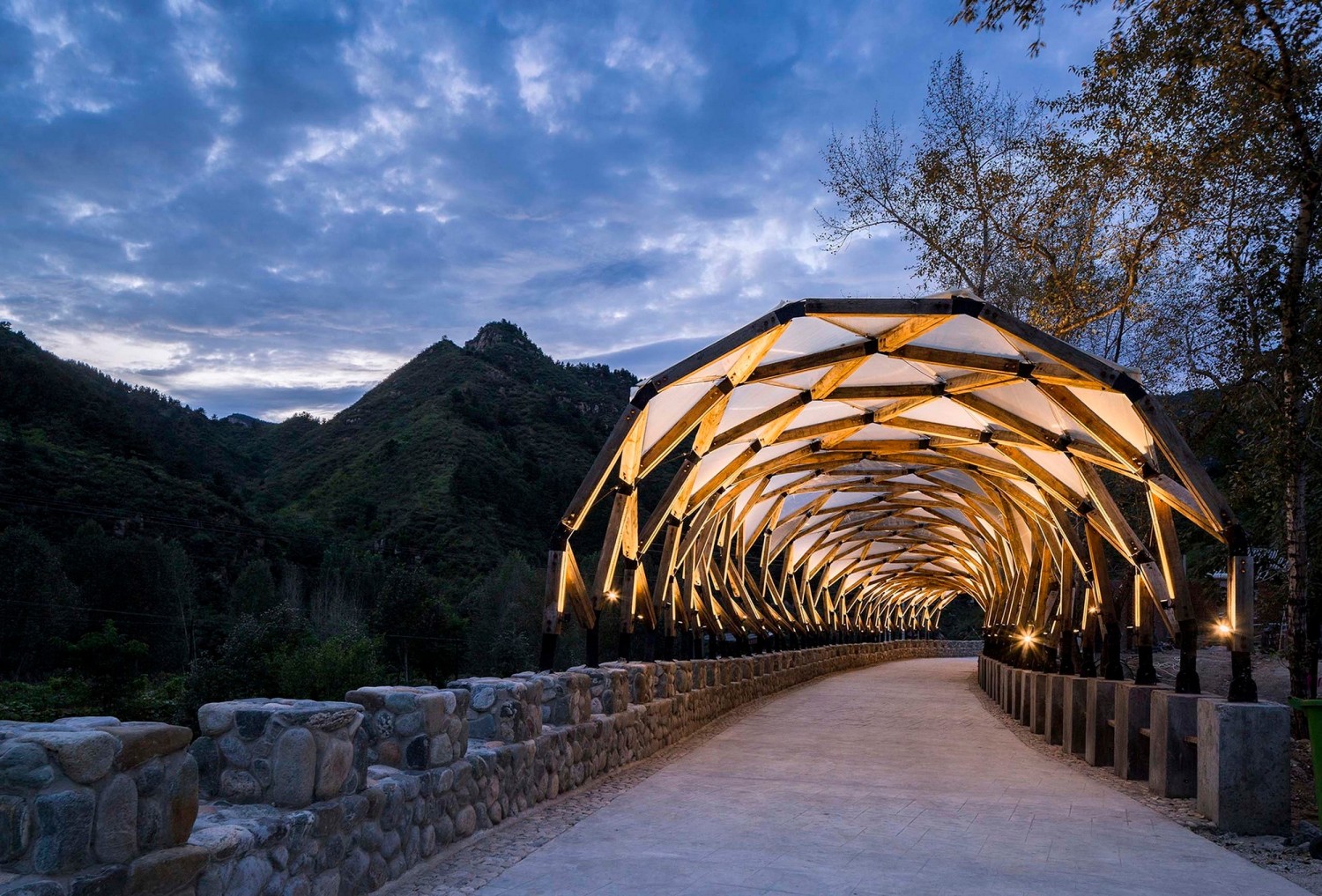 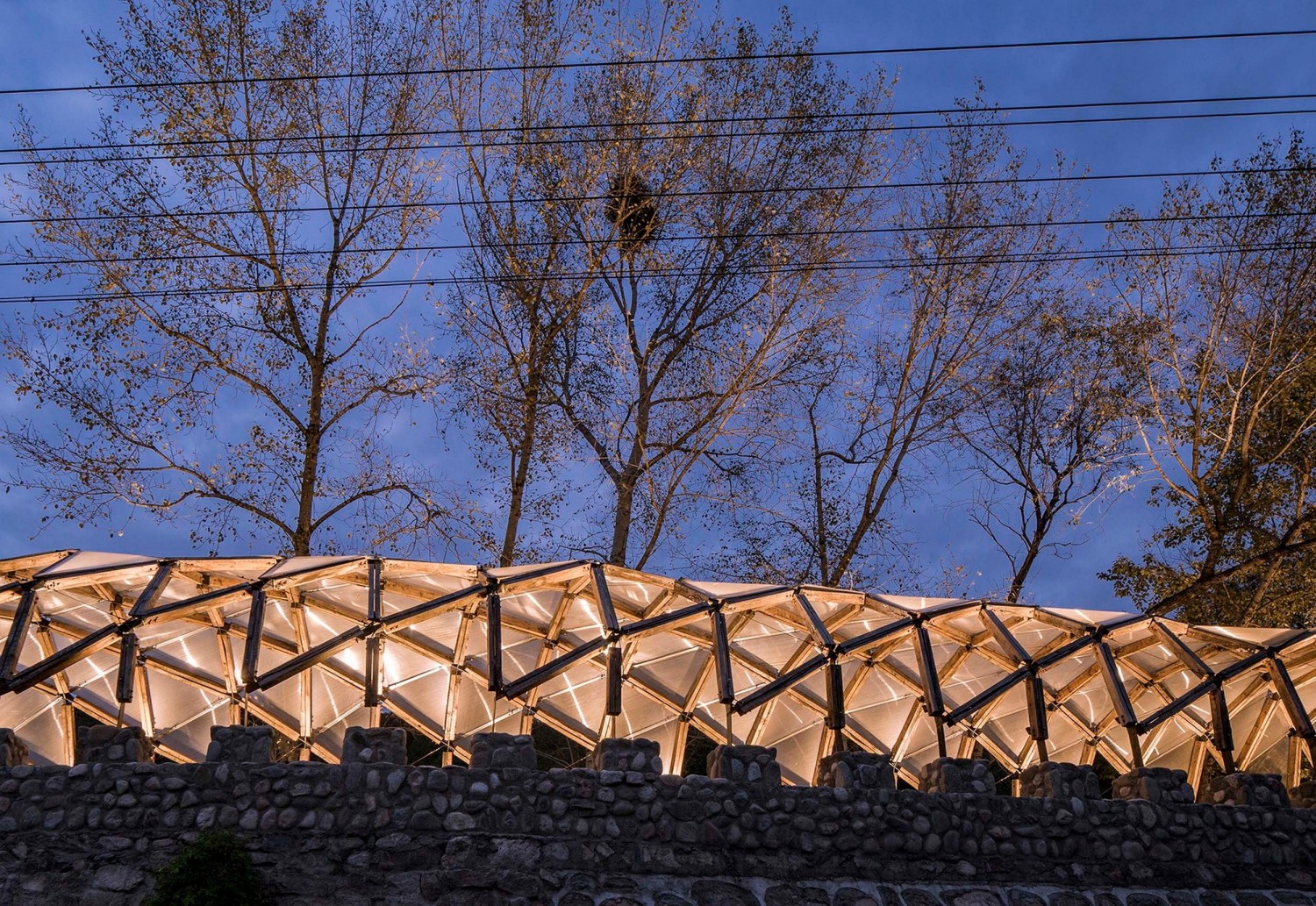 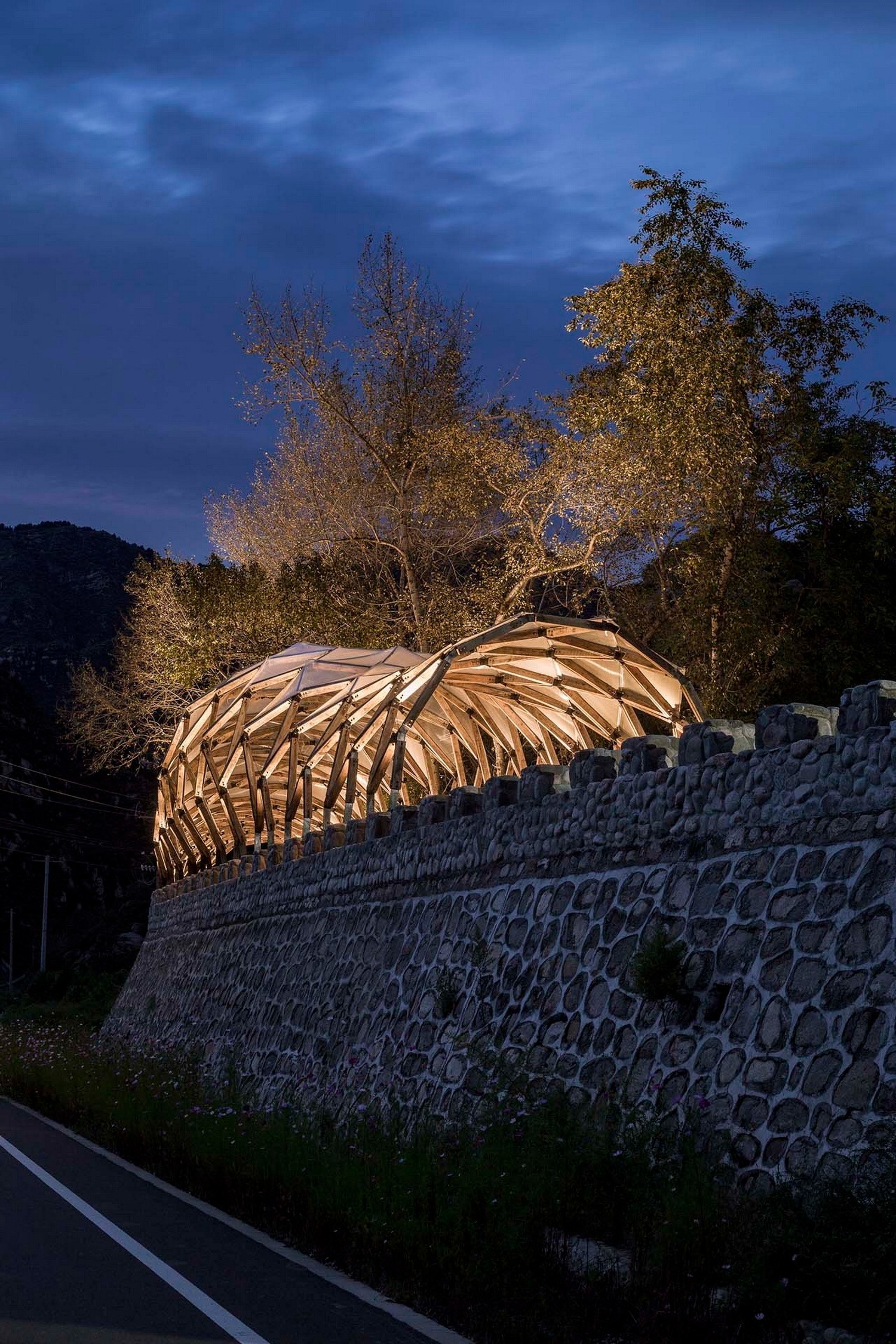 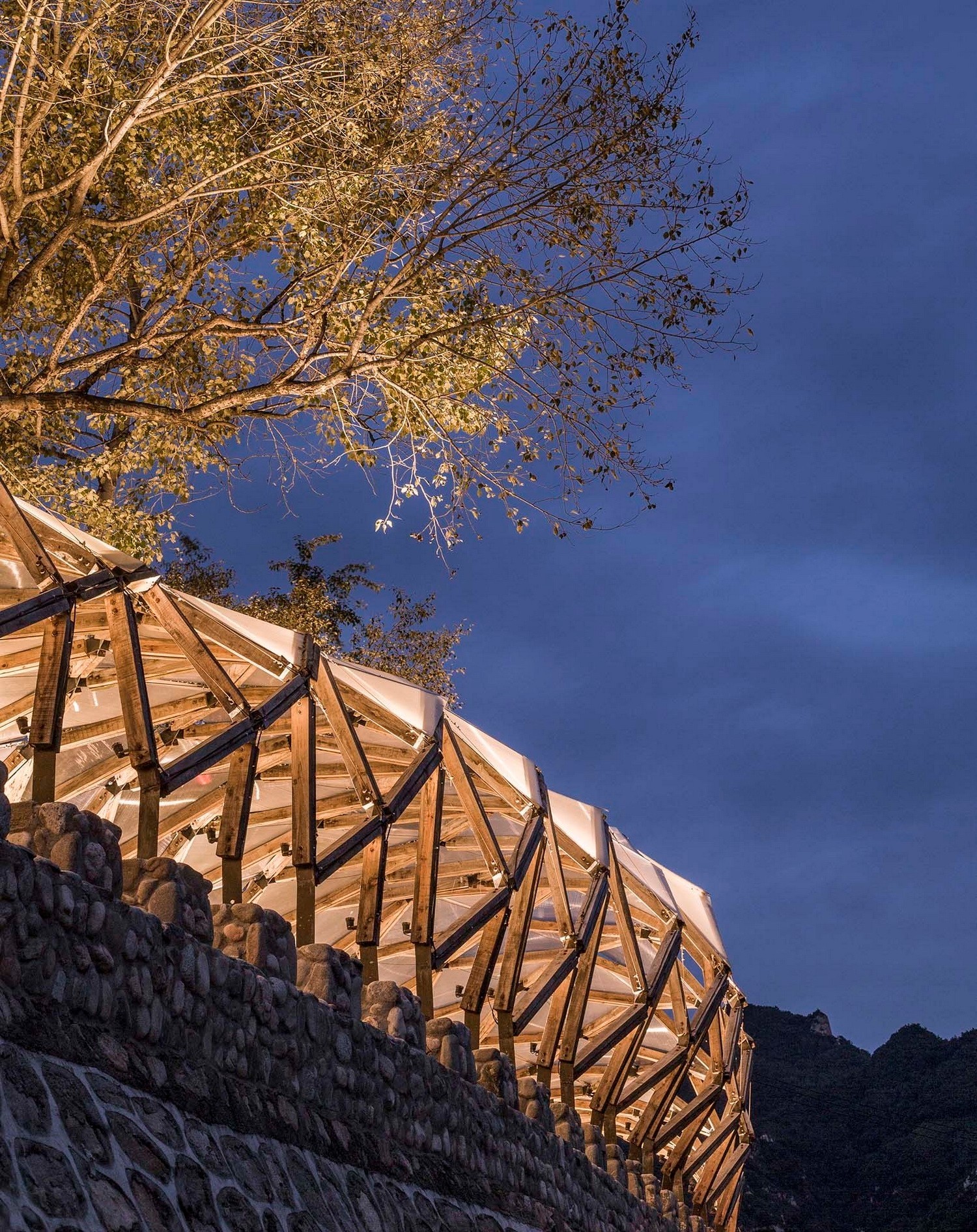 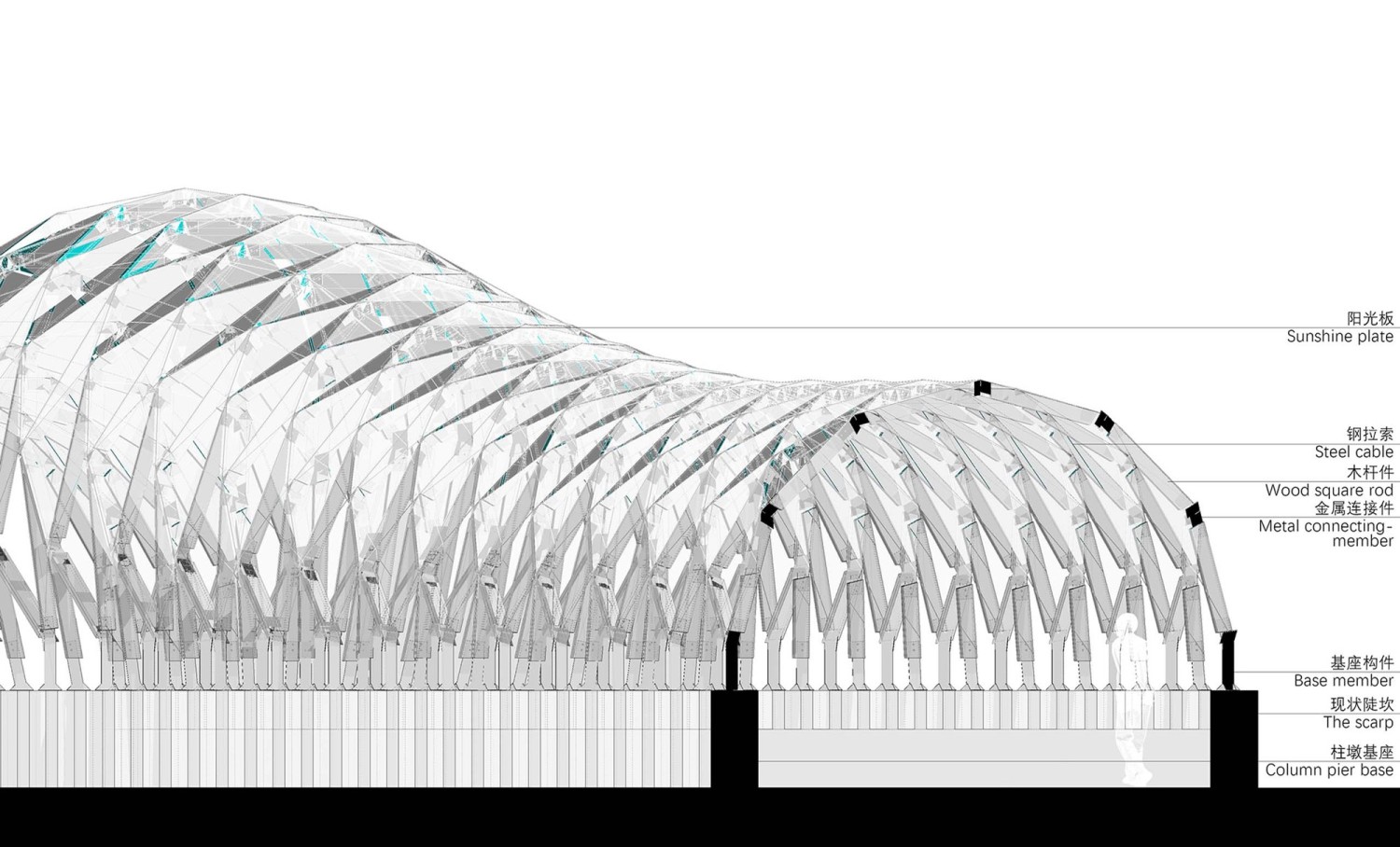 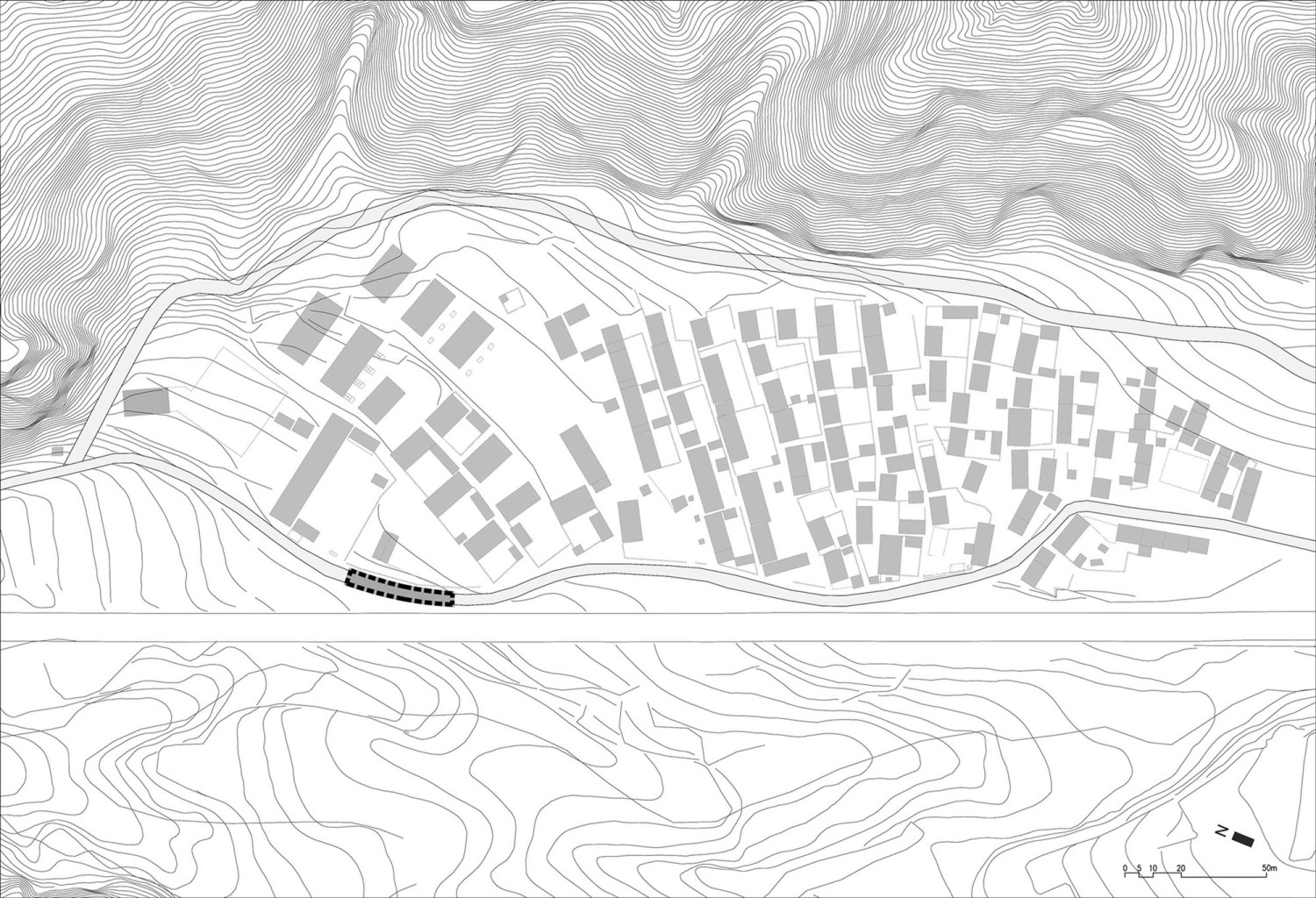 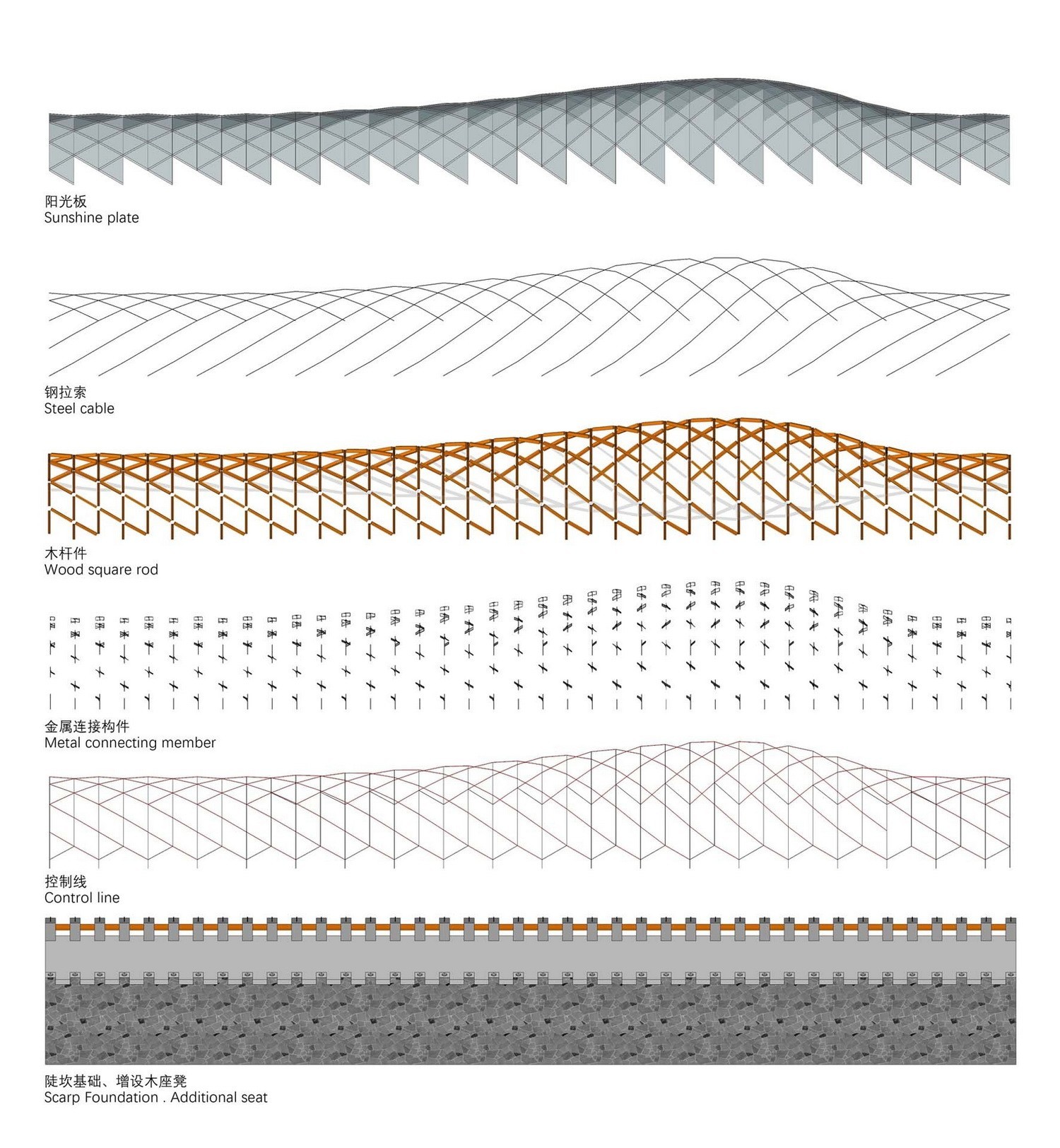