The Norwegian painter Harald Sohlberg (1869-1935) stayed in the Rondane mountain area for several years to do studies for his most famous work, Winter Night in the Mountains. The motif was a summation of sketches from several standpoints. The most recognisable position was close to where the viewpoint platform is built today. 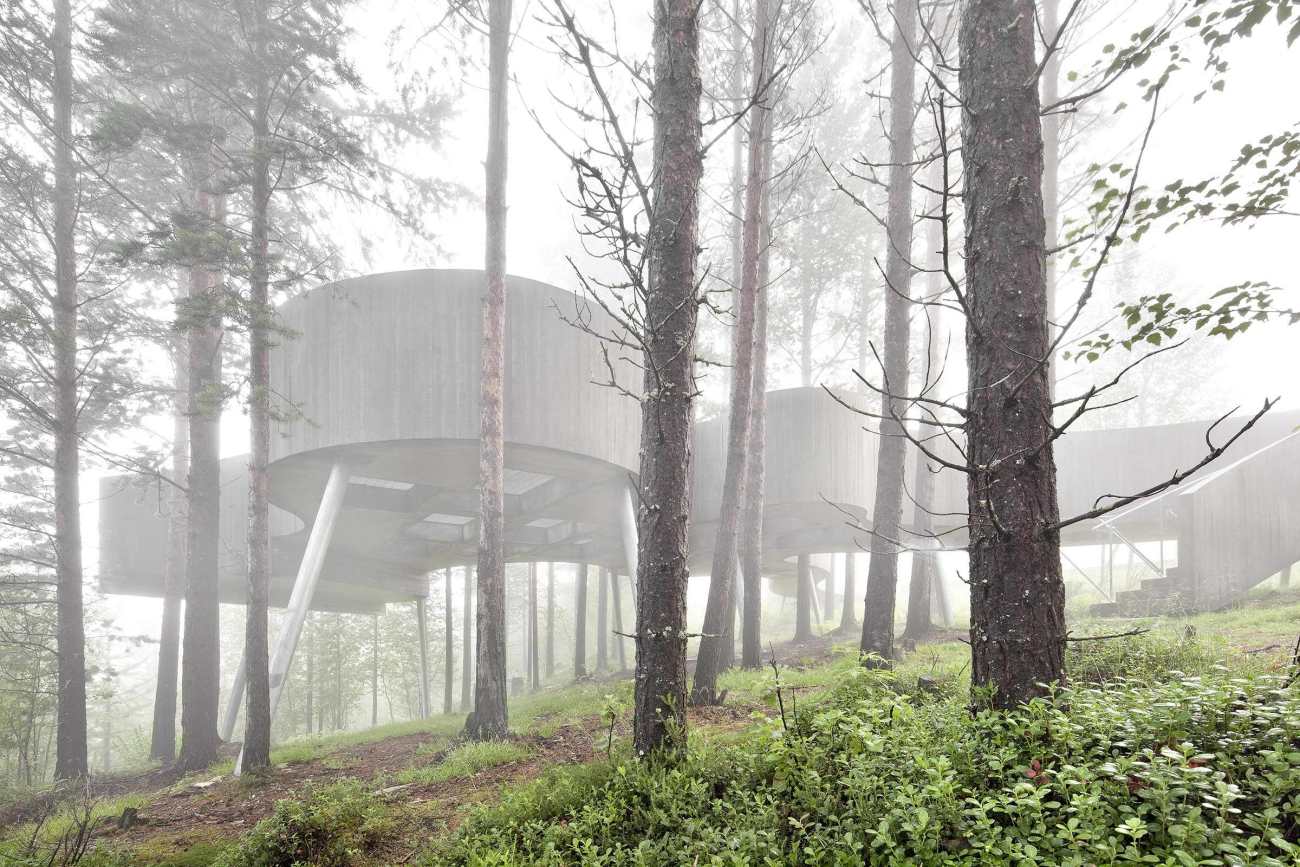 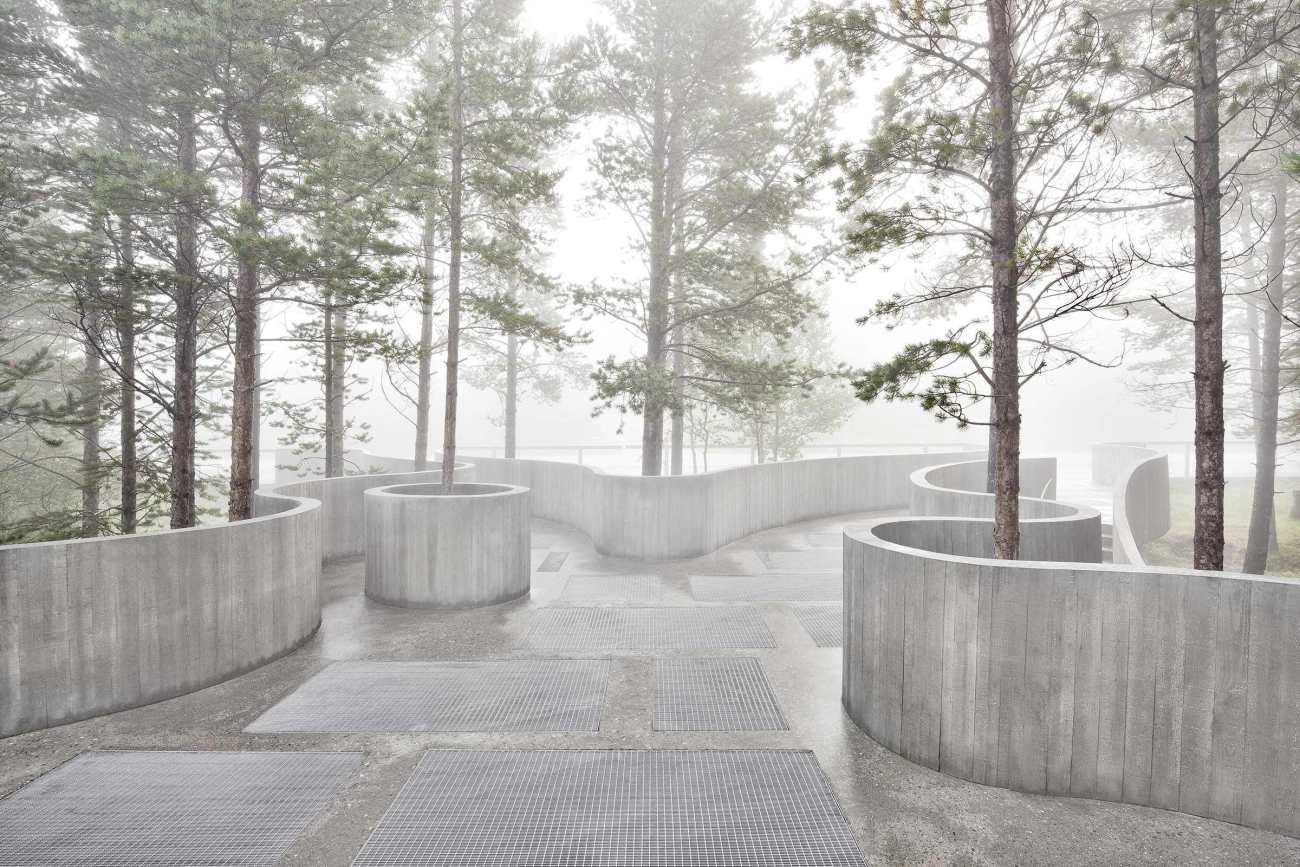 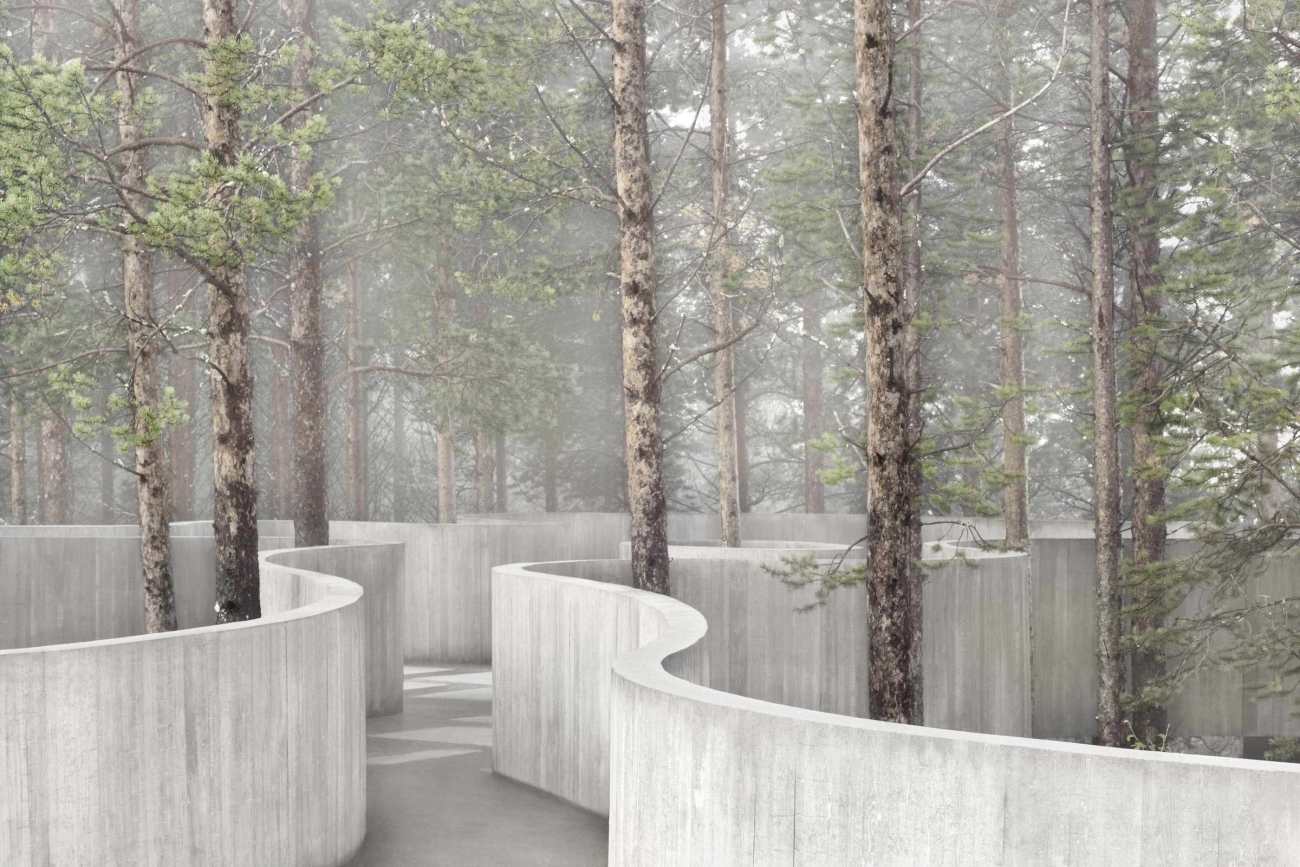 The dark silhouette of pine trees in the foreground is a significant quality of the painting, framing the almost luminescent winter landscape. Also today the site has a certain dynamic quality, between the densely growing pine trees on the hill side and the distant mountains. This relation became the starting point for the geometry and the structure of the platform. 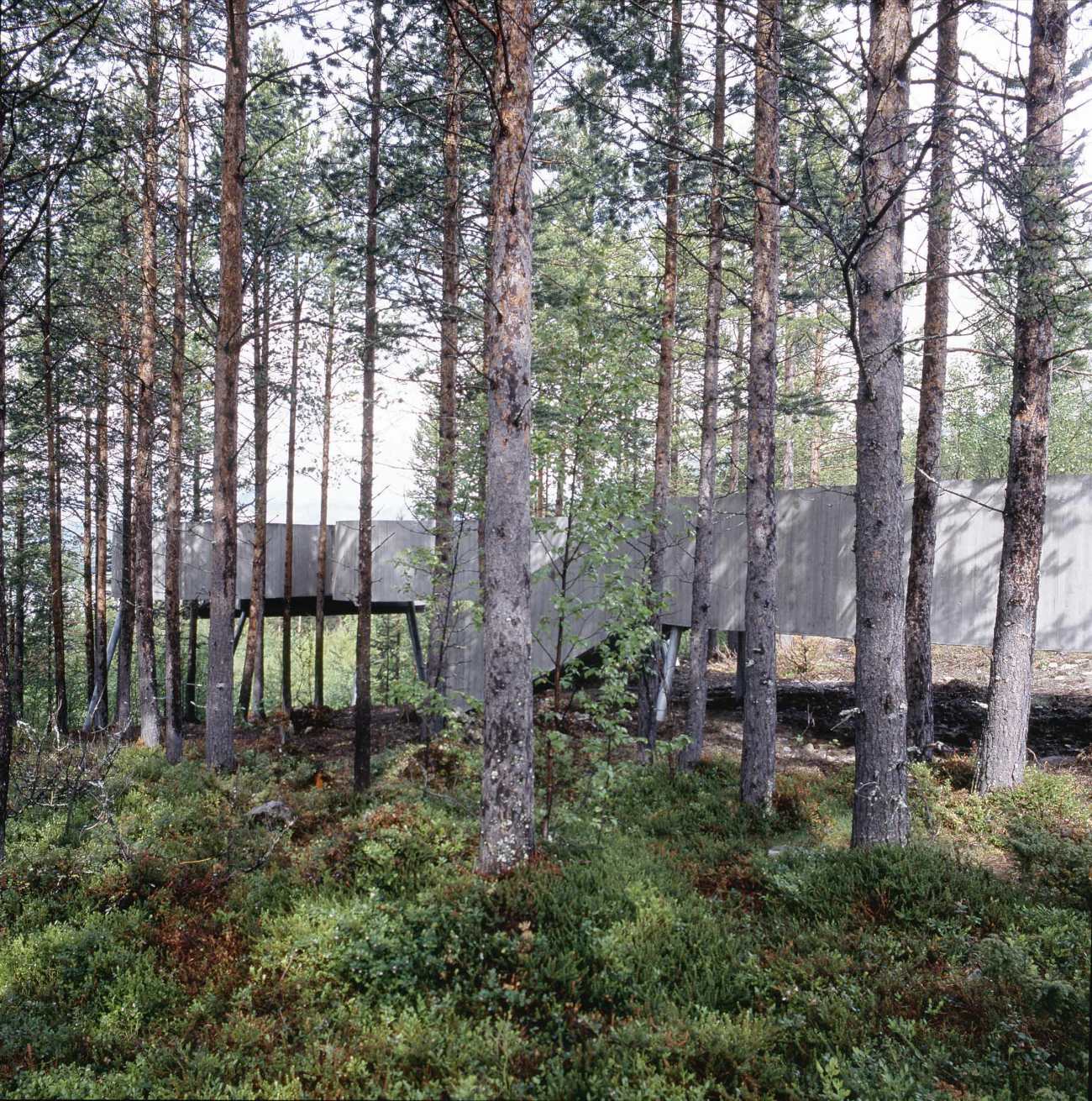 Several tests were executed by placing a ladder up against the tree trunks, trying to find the best views and interesting spaces between the trees. After the trees and topography were digitally registered, the form of the platform could be defined precisely in such a way that no trees had to be cut. It was also crucial to find a foundation system that would not destroy any roots. The ground in the area was frost-free at 2.7 meters - any traditional foundation would imply substantial excavation, and cut down of most of the trees. 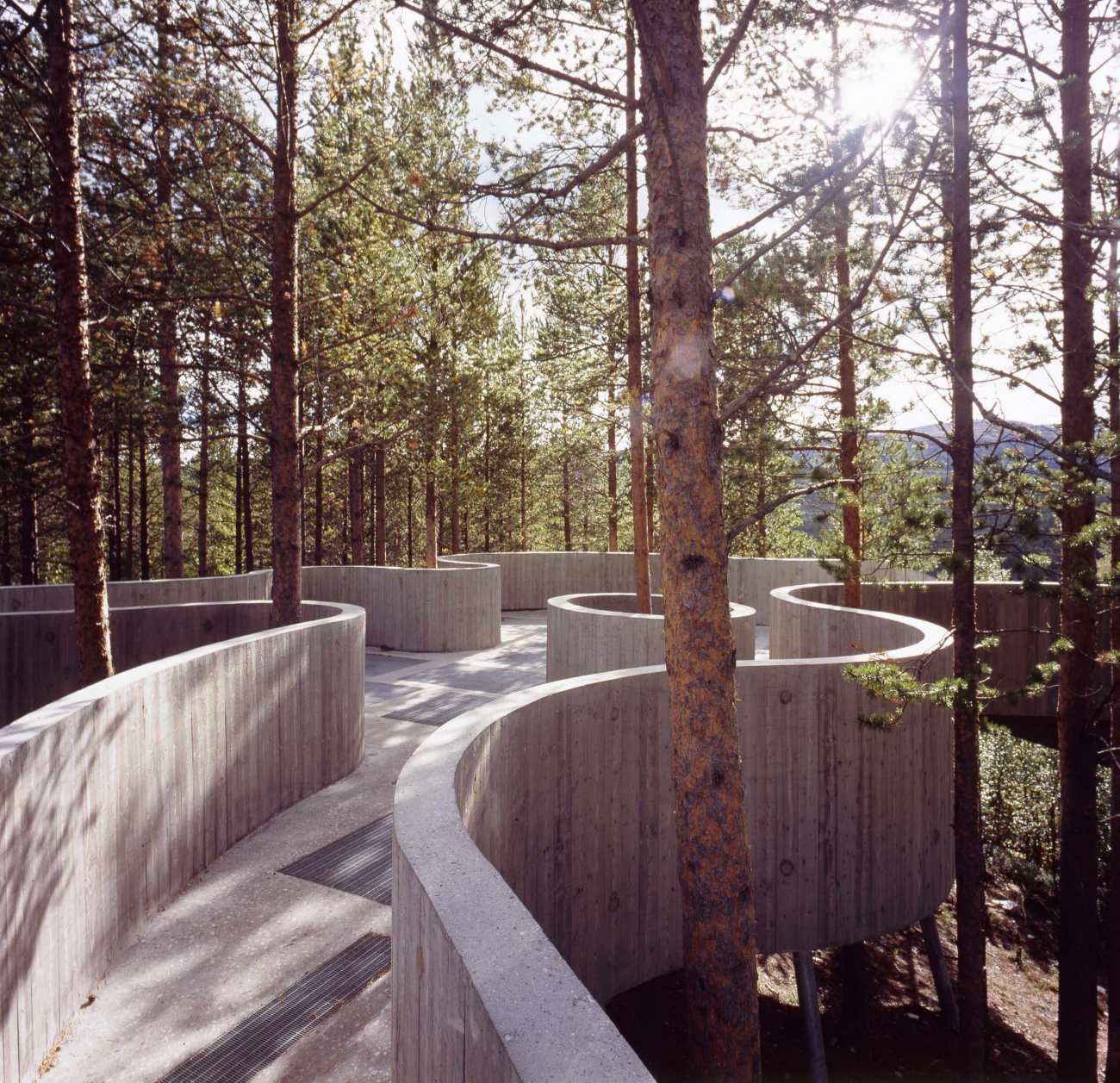 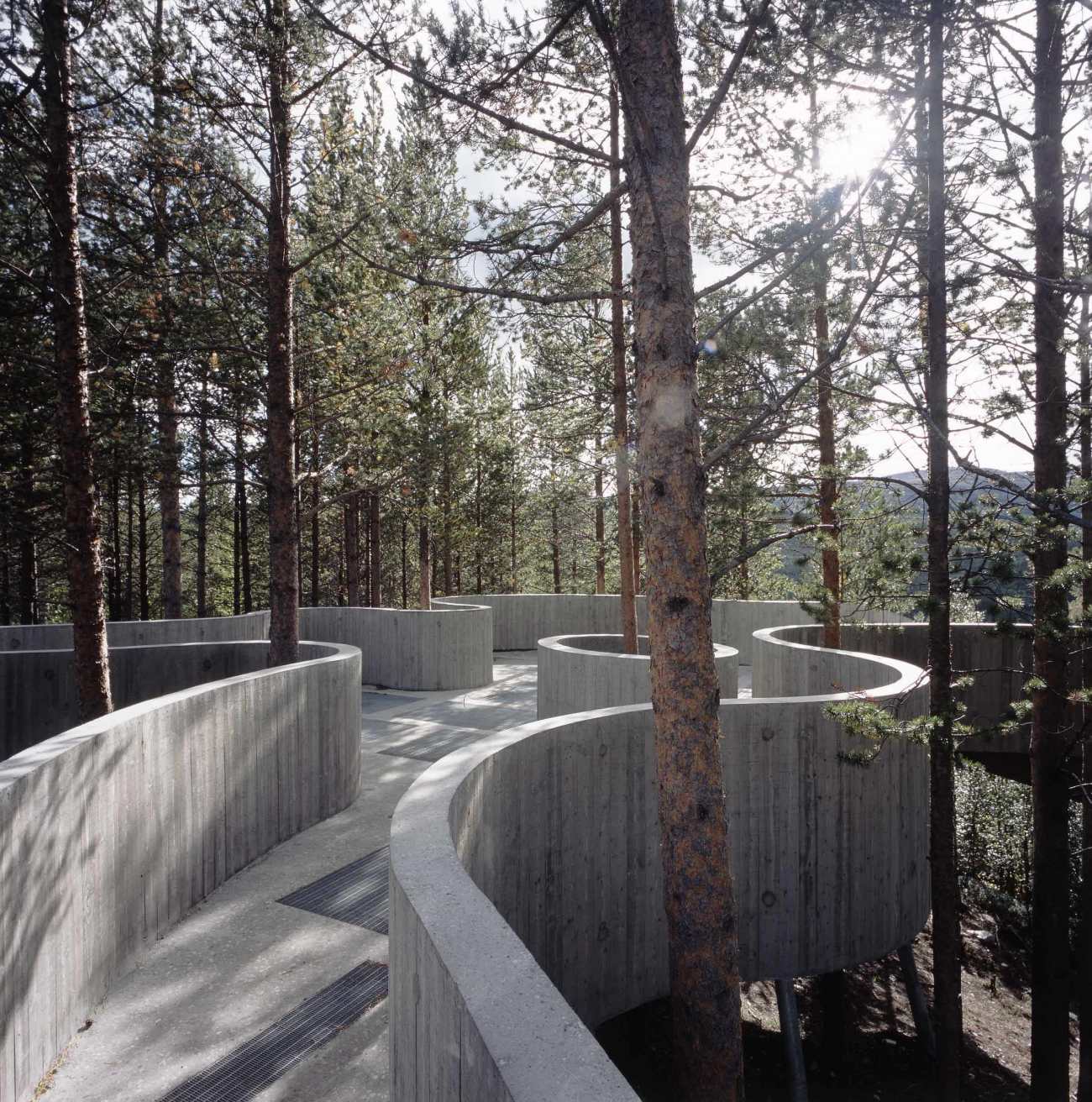 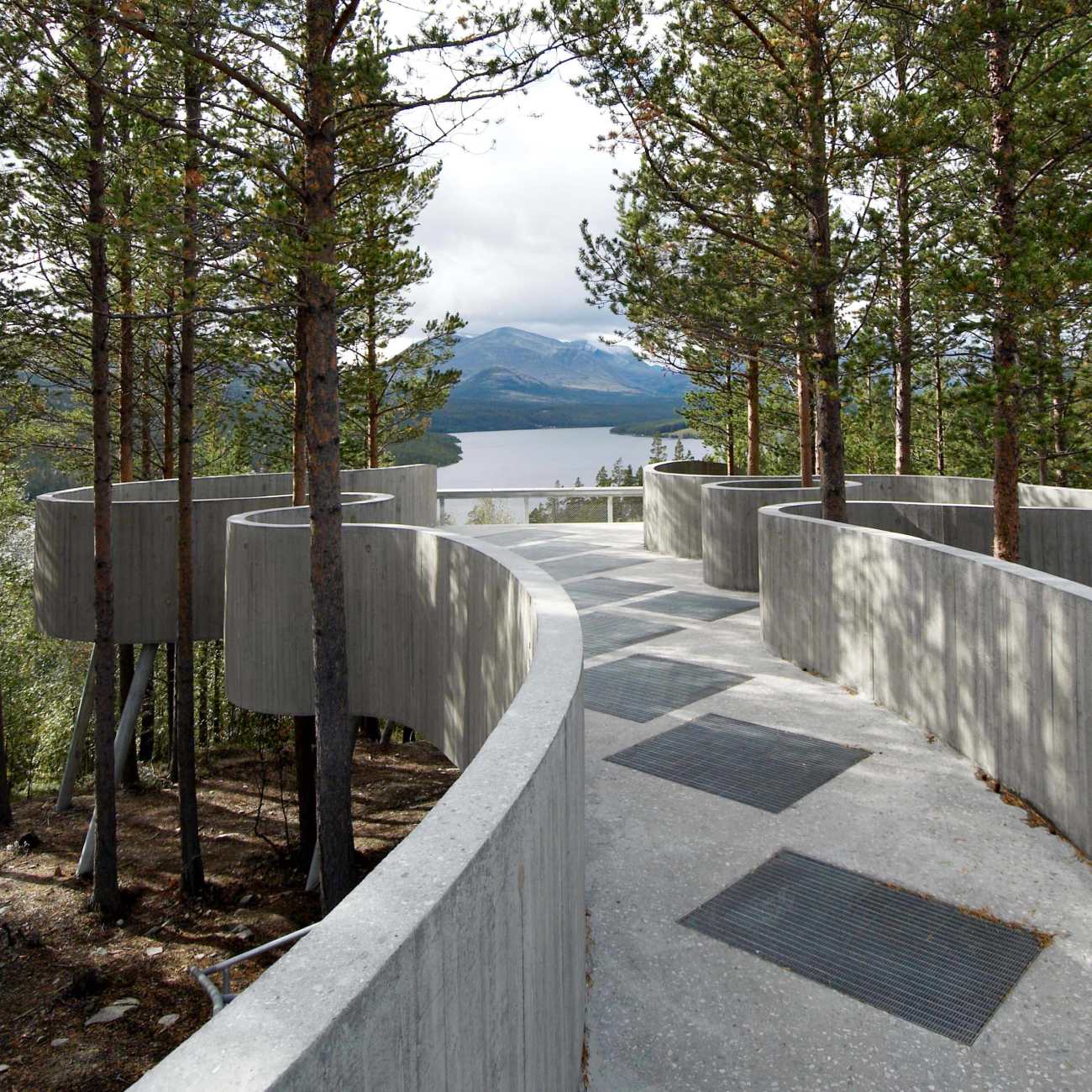 In early stages of the project, the platform had a somewhat flexible construction made in steel. The pillars would have "snowshoes" resting on the ground, allowing the structure to move along with the frost heave. Load tests on a 3D-model were done by the structural engineer, and showed that the curved beams would collapse when strained by snow and movements in the ground. The structure was then changed to concrete, and a torsion stiff connection between the curved beams and the floor plane could be established. 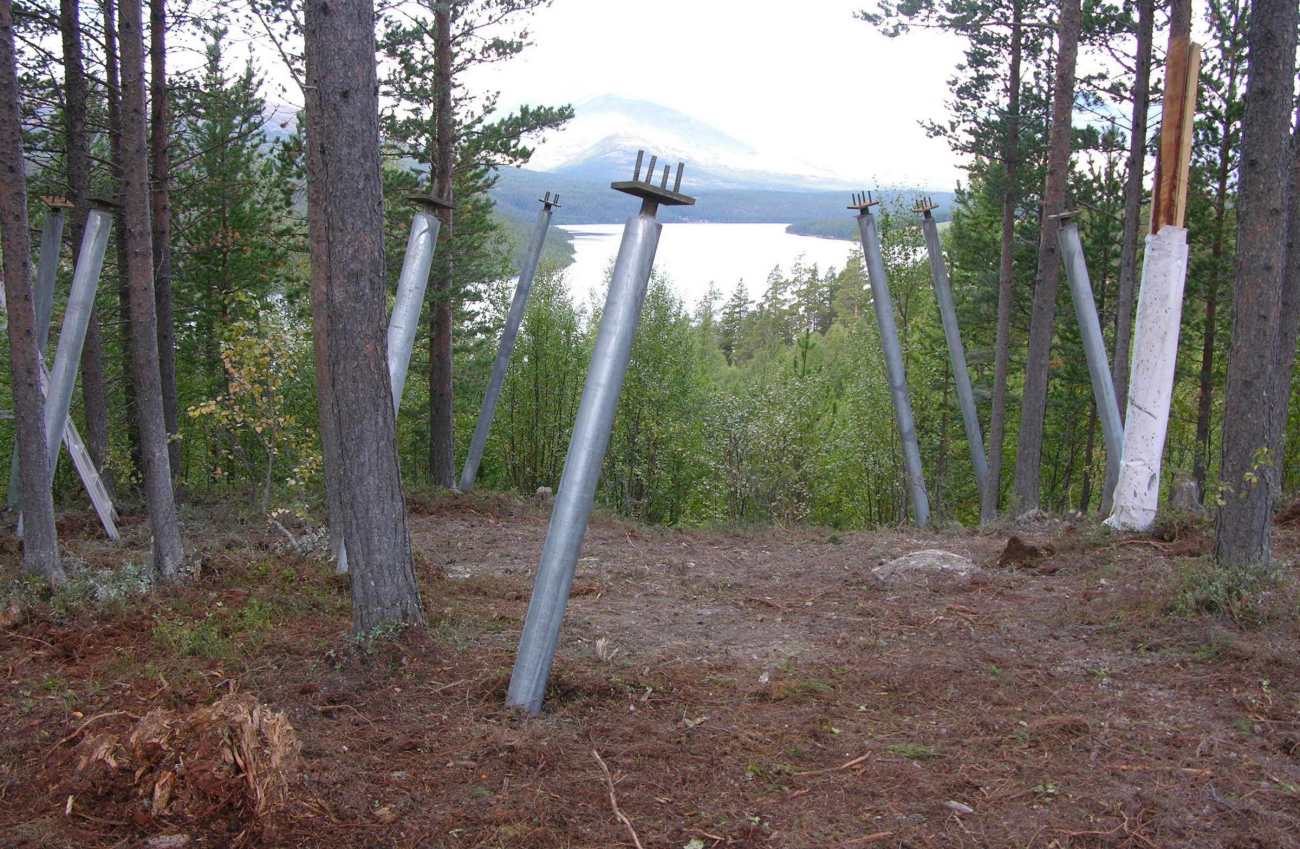 The beam along the periphery of the platform also works as a railing. The beam rests on thin steel core pillars, drilled to rock, some places more than 12 meters below the ground. The rectangular openings in the floor allow rain and sunlight to get down to the terrain. A staircase leads to the space underneath the platform and further down the hill to the lake. 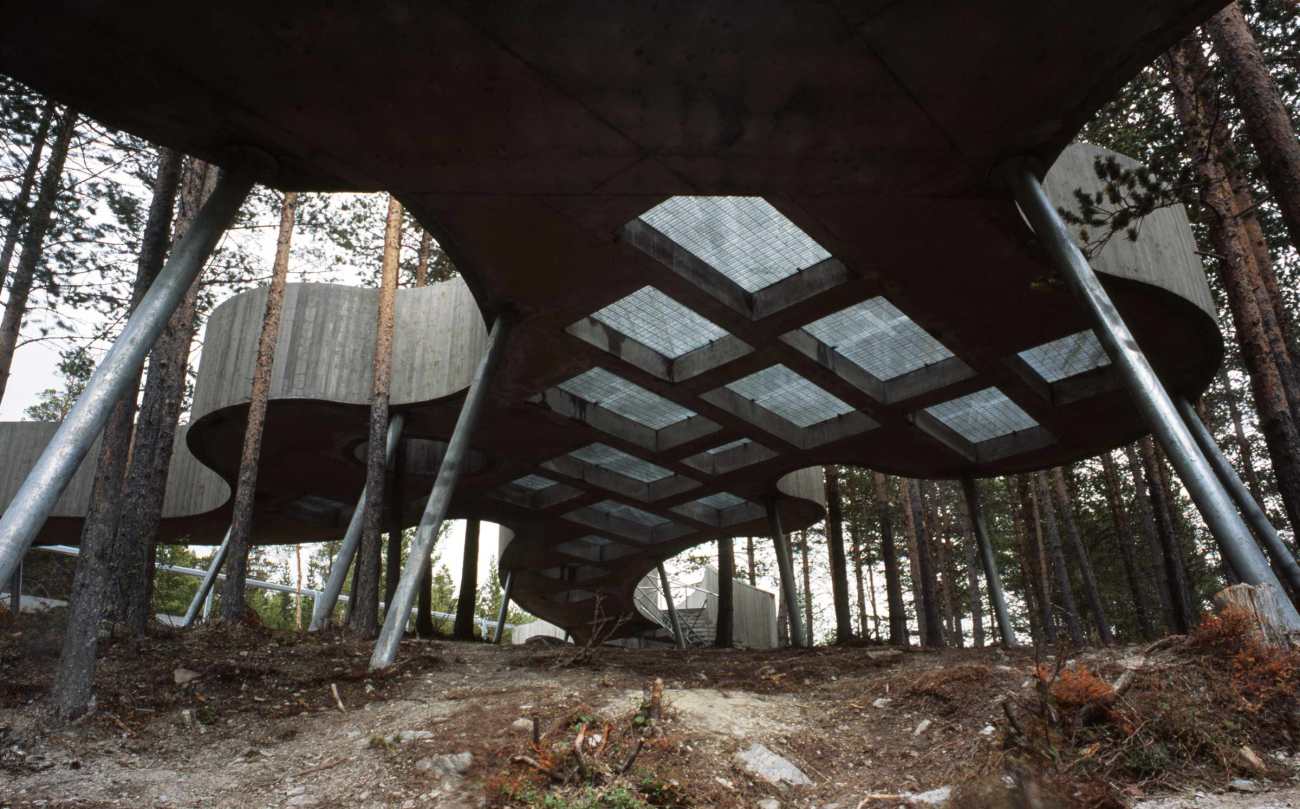 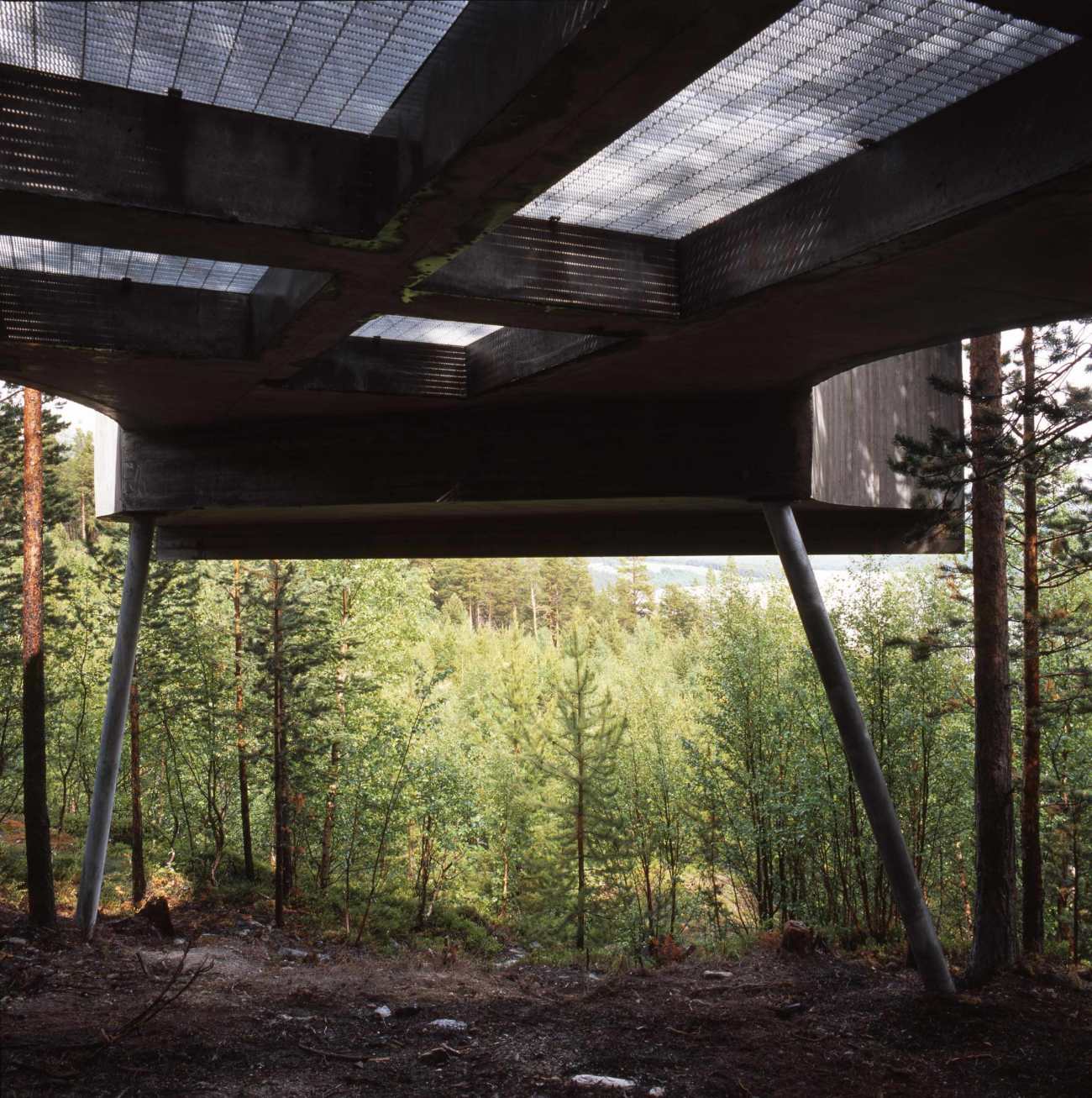 The floor has a hardly noticeable tilt outwards (0.3 meters) giving a slight feeling of being pulled towards the view. The movement between the pine trees, from the road towards the beautiful mountain motif, became an architectural answer to the artist's interpretation - already evident in the painting. 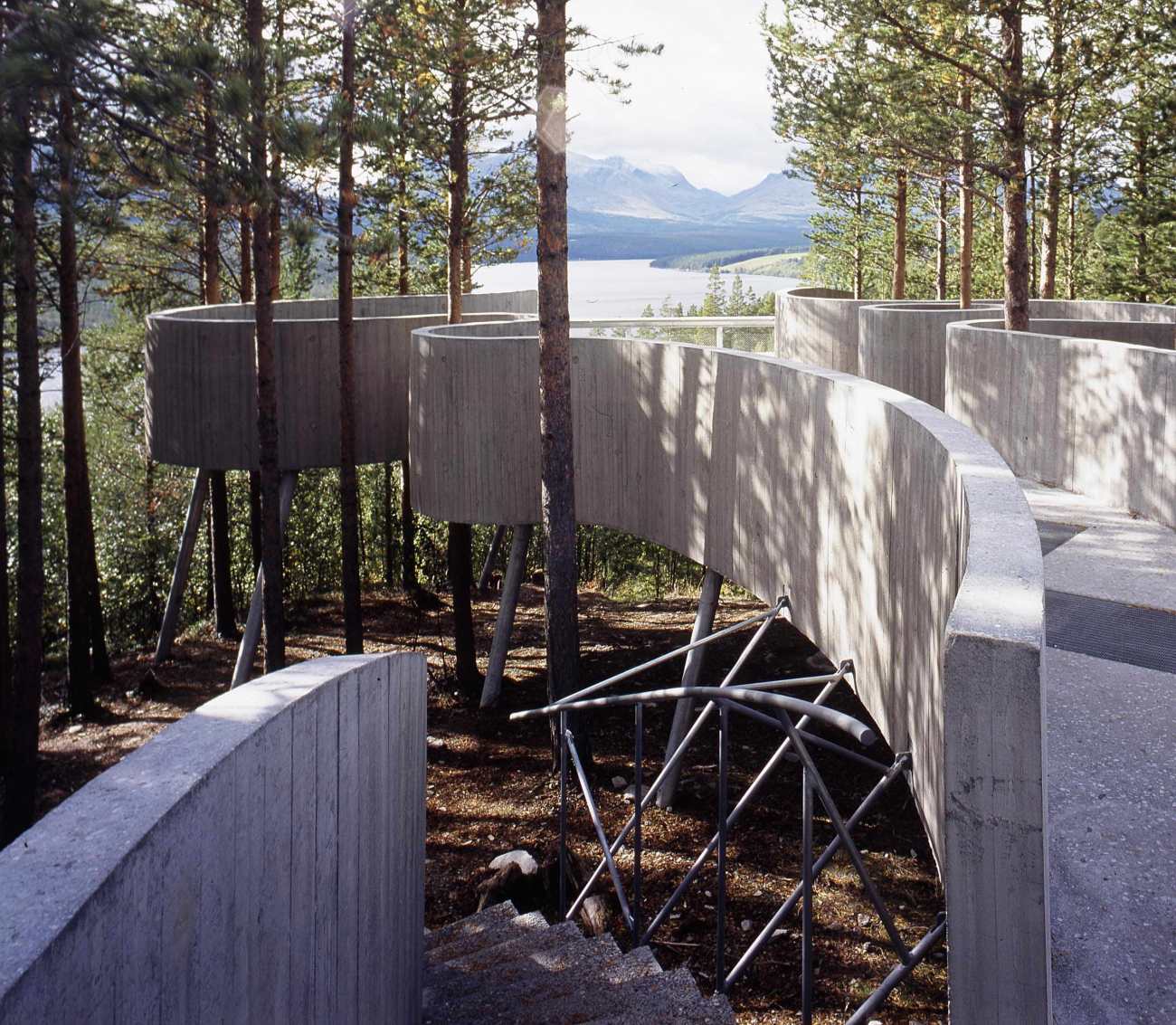